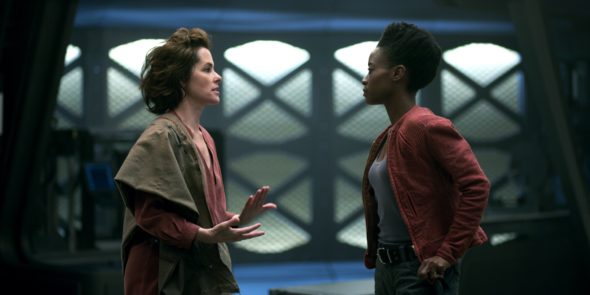 Are you a fan of Lost in Space? Deadline reports Sibongile Mlambo has been upped to series regular for season two of the Netflix TV show.

Netflix has not yet announced a premiere date for season two of Lost in Space.

A reboot of the 1960s sci-fi series, the drama follows space colonists John (Stephens) and Maureen (Parker) Robinson, their children, Judy (Russell), Penny (Sundwall), and Will (Jenkins), good-hearted smuggler Don West (Serricchio), and stowaway Dr. Smith (Posey). When their spaceship, the Jupiter 2, veers lightyears off course, they crash-land on an unknown planet where they meet Robot, and the adventure begins.

What do you think? Have you seen Lost in Space?

My granddaughter and I loved this series and were sooo disappointed when it did not come on for the expected April date/ Our calendars were marked and we had a sleepover for that night!

I have seen the show and i loved it from beginning to end. They have truely know how to make a show.

I’m a sci-fi fan to core. And anyone that is a naysayer about this show needs to go back to their true sci-fi roots!
That being said, I liked the Angela character and thought the actress that played her did an excellent job (sorry don’t want to misspell her name)! The whole cast is great!

I am a die hard follower of the original series. We was 9 when the show debuted in 1965. I was a bit skeptical after the 2004 pilot failed, after watching the new show (so far 5 runs through it) I am wild about all of it, Bringing John Williams back to do the music was a bit of genius. I love the ship, the Robot, and the updated cast, is brilliant. Every time I hear the theme music that is really familiar to Season 3 of the original, is amazing. The actors, seem not be forced, but it seems… Read more »

I love the new Lost in Space! Can’t wait for season 2 and all the new adventures it will bring…

Too bad. I say that because I want the show to focus on the Robinsons and everybody on their ship. But if I remember correctly she was with everybody else on the Resolute, which means the story will bounce back and forth between the two places and groups. I want it to solely focus on the J2 crew. She didn’t sneak onto the J2 did she? If she did then I’m ok with that.

Love it! I’m 63 years old and was a big fan of the original old series. I love how this revamped version is cleverly made. I’m looking forward to the seasons to come!