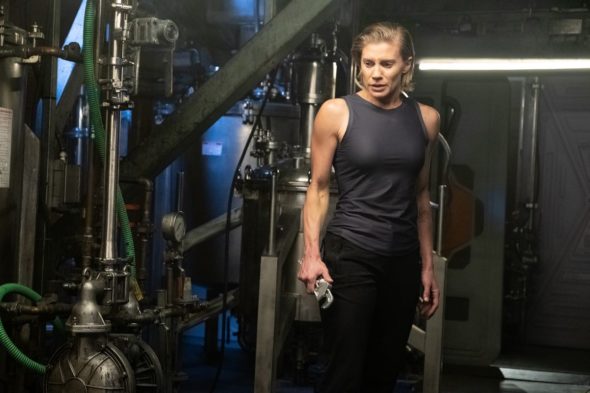 Another Life is getting more added to its journey. Netflix renewed the series for a second season this week. Katee Sackhoff, the star of the series, was the first to break the renewal news on her Twitter account. Aaron Martin created the series, and it is production by Halfire Entertainment.

I have the most exciting news! Another Life is coming back for Season 2 on @Netflix! Can’t wait to see you all back in space❤️❤️👽🚀 #AnotherLife @NXOnNetflix pic.twitter.com/PUSFwJbIuF

Another Life tells the story of Niko Breckinridge. Fans watch as she leads her crew on a mission to search for new life in space. Along the way, the crew faces danger.

Season two of the Netflix sci-fi drama will start production in 2020. The cast also includes Justin Chatwin, Samuel Anderson and Elizabeth Faith Ludlow. New members to the cast will be named at a later date.

What do you think? Are you a fan of Another Life? Will you watch season two?

I like it. It has something that Sci fi shows lack. It could be more but what it has is totally worth it

I find it frustrating to binge watch and then find out that a series is either cancelled or we have to wait until another season is produced. In the case of “Another Life,” in my opinion there couldn’t be a more desperate (and infuriating) cliffhanger. I’ve watched other series on Netflix that were cancelled. Either we’re left dangling, or they’ve rushed an abrupt and downright lame ending, e.g. The 100. From now on I’m not going to get hooked on a recent series that could be cancelled and left as a permanent cliffhanger. Either the series is completed, with a… Read more »

“Another Life” is an engaging and interesting show.
So thrilled Netflix is adding a 2nd Season!
Netflix needs to advertise this show!
Meanwhile, if we want to see several seasons, we need to let our friends and contacts know about it!

Yes! So glad that it’s coming back. Don’t understand the reviews. It’s got a lot to recommend it. Deals with a less rosy picture than most space exploration movies, especially in the realm of the crew’s very human conflict levels. Can’t wait to see where it goes.

I’m really happy to see there will be another season. So many directions this story can take.

Another Life was the first series I’ve watched since HBO canceled The Sopranos. It was also my first “binge watch”. I am so happy it’s returning for Season 2 and hopefully many more.