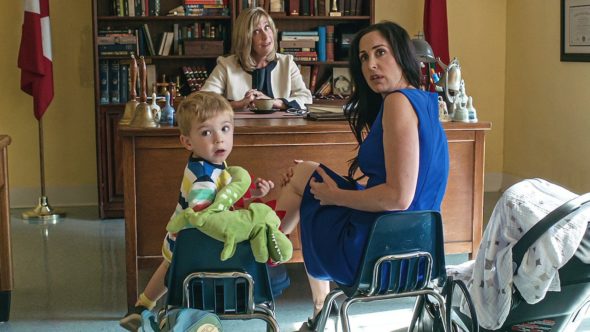 Workin’ Moms is coming back! CBC just announced they’ve ordered a fifth season of the TV show for the 2020-21 season.

The comedy series, which airs on Netflix in the U.S., centers on four Toronto mothers who return to work, after the births of their respective babies. As it follows this group of friends, it takes a deep dive into the challenges, joys, failures, and successes faced by working mothers. The cast includes Catherine Reitman, Dani Kind, Juno Rinaldi, Dennis Andres, Jessalyn Wanlim, Sarah McVie, Sternberg, Ryan Belleville, and Oluniké Adeliyi.

Season five of Workin’ Moms is expected to debut on CBC this coming winter. Netflix has not yet announced whether or not it’ll pick up the new season, though it’s likely. Read more info below:

What do you think? Have you seen Workin’ Moms? Will you watch season five?

Just started watching. So funny! Glad I have 4 season to binge before the 5th.

Love working moms, it often embraces the fact that “mommy guilt ” is bullsh*t. We re human, we re ambitious, our kids are all gonna need therapy anyways so aim for the moon and try to take your family with you.

My wife and I absolutely love the shoe

Definitely will watch!! Love it!!

Yes I will watch Season 5! A long wait however.