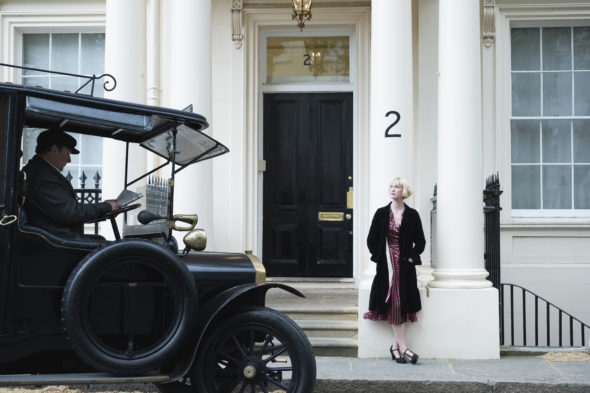 The Frankie Drake Mysteries will continue. CBC just announced they’ve ordered a fourth season of the TV show for the 2020-21 season.

The Canadian drama, which airs on Ovation in the U.S., is set in the 1920s and centers on Frankie, the city’s first female detective, and Trudy, her partner in crime solving. Unbound by convention, the Drake Private Detectives are adept at turning their gender disadvantage into an advantage. The cast includes Lauren Lee Smith and Chantel Riley.

Season four of Frankie Drake Mysteries is set to debut on CBC this coming winter. Ovation has not yet announced if they will air season four, but it seems likely. Read more info below:

What do you think? Are you a fan of Frankie Drake Mysteries? Will you watch the upcoming season?

It was a fun show to watch. Why was it cancelled?

I am Heartbroken that there will not be a season 5 of Frankie Drake this was the best show , Now I won’t watch this channel anymore!!!!!

Enjoy the series. glad it is still on the air

I am looking forward to seeing the new season of Frankie Drake.When will Ovation air it?

I am looking season 4 of Frankie Drake detective ,. Frankie´s caracter change too much..i dont recognise her, her costumes are wrong..modern look ..in the middle of actors who wear « almost » the good 20th period costumes..It is very confusing.
It look like an actrice caprice… or a big cut in the budget..or..a new producer who dont care..too bad..S.Harel

A refreshing entertainment, well written, acted and producers. Light hearted and not too heavy.