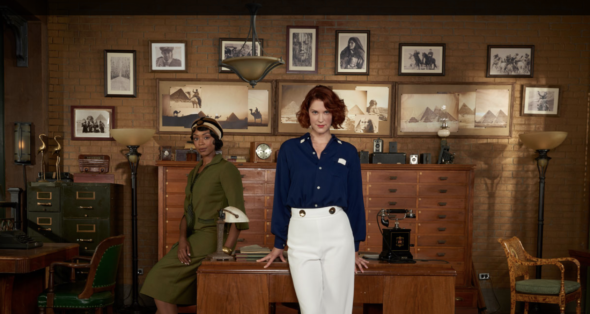 While there are plenty of cases the Toronto police shy from, the same cannot be said of Frankie and Trudy. Unbound by convention, the Drake Private Detectives are adept at turning their gender disadvantage into an advantage.

The cases Frankie and Trudy take on bring them in contact with people from all walks of Toronto life — from the wealthy and privileged to beauty queens, and even church choirs.

These women do not know the meaning of the word fear, and while that often lands them in deep trouble, they’re always able to dig their way out. A new day is dawning, and Frankie and Trudy are more than ready for it, even if the world isn’t quite ready for them.

Series Finale:
Episode #41 — A Family Affair
This episode has not aired in the U.S. yet.
First aired: TBD


What do you think? Do you like Frankie Drake Mysteries TV series? Should this CBC and Ovation TV show have been cancelled or renewed for a fifth season?

Yes I believe that a fifth season should begin the return of Frankie Drake Mysterys. It is a very good show and should continue.

Just watched the episode on boxing. I have watched since first episode. Unfortunately this episode really made me lose all respect. Seriously, her fight scenes were insulting, the gloves !! and no marks on her face come on, !
I love all the characters except for Frankie. Her character has went down hill, way to shallow and self important while the others have evolved beautifully. Go back to being more era authentic and realistic. I can always come show you all how to box .

I’m very upset they cancelled Frankie Drake. Not only did they cancel the show but left it with a cliffhanger. I have never understood why shows are cancelled without closing out the story. Any cancelled shows should be required to finish the storyline.