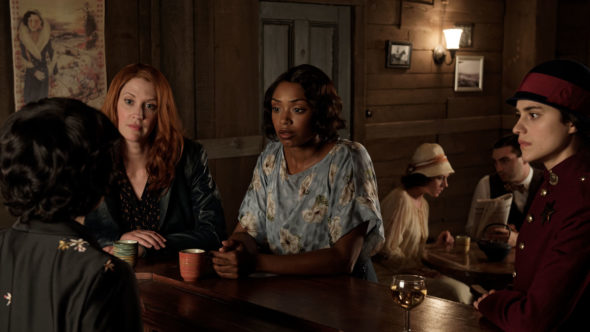 Frankie Drake is a great show! Please do not cancel. It is a staple in my life! It always makes me smile. Never saw a bad show!!!

Love the series and season 4 has left us hanging. Bring on season 5.

Renew, please! Since Ovation did the first three seasons, please give us the fourth and final season. Too bad CBC cancelled! Boo!

I love Frankie Drake and that this show is set in the 1920’s. I do not get the Canadian channel so I watch this on Ovation. Please renew as I would hate if this show is stopped being available like the Miss Fisher Mysteries.

Please bring “Frankie Drake Mysteries” back to Ovation since I don’t get the Canadian Channel that it originated from. I love the show and really miss it when it is not on!!!!!!

We love Frankie Drake, we love watching it.

Frankie Drake is GREAT!!!!! We can hardly wait for new episodes.

I just found this show and enjoy watching. Renewal would be nice.

This is a really good series. My only question is, does it accurately portray race relationships during this time period? I love the racial diversity

I’m very disappointed that Ovation cancelled this series. It was humorous, well acted and cerebral. For shame!