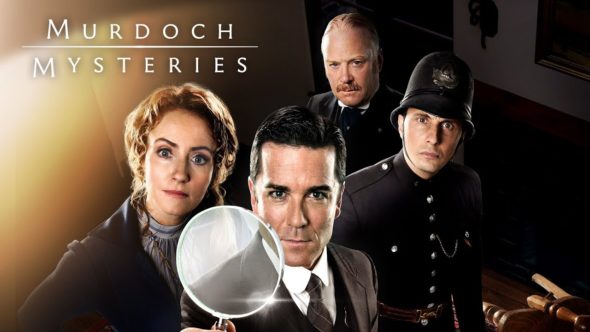 Another season of Murdoch Mysteries is coming, and this one will have an important milestone for the series during its airing. The season will return for season 13 in 2020, and the exact has now been revealed. The series will return with brand new episodes on February 1. The series will air back to back episodes on Saturday nights. The season has a total of 18 brand new episodes, which will air over a span of nine weeks.

“Ovation, America’s only arts network, has announced the season 13 premiere date for long-running fan favorite Murdoch Mysteries. The drama series is set in Toronto in the late 1890s and early 1900s during the age of invention, where Detective William Murdoch (Yannick Bisson), the methodical detective, and his impassioned wife Dr. Julia Ogden (Hélène Joy) enlist radical forensic techniques like fingerprinting and ultraviolet light to solve a range of gruesome murders. Airing back to back episodes all season long, the 13th season premiere of Murdoch Mysteries will air on Ovation starting Saturday, February 1 at 7pm ET / 4pm PT.

Murdoch continues his deft detective work and bolsters his investigations with new innovations including a “searchizer” device that measures facial features and matches them with existing police files. Unfortunately, he is still rattled by suspicions about Violet Hart’s (Shanice Banton) appointment to coroner and doesn’t completely trust her abilities or motives. The station also sees a new addition with Special Constable Robert Parker (Marc Senior), an African American former Pinkerton who went from suspect in a union murder to helping solve the case.

Murdoch Mysteries is based on Maureen Jennings’s popular Detective Murdoch series of novels and premiered in Canada in January 2008. Murdoch Mysteries is executive produced by Christina Jennings, Scott Garvie, Yannick Bisson, Hélène Joy, and Peter Mitchell, who also serves as showrunner, and produced by Stephen Montgomery and Julie Lacey. Murdoch Mysteries is developed and produced by Shaftesbury, in association with CBC, ITV STUDIOS Global Entertainment and UKTV, and with the participation of the Canada Media Fund, the IPF’s COGECO Television Production Fund, the Canadian Film or Video Production Tax Credit, and Ontario Creates. Shaftesbury Sales Company and ITV STUDIOS Global Entertainment hold worldwide distribution rights for the series.”

What do you think? Are you a fan of Murdoch Mysteries? Will you watch the new season?

Love the show. We look forward to watching it every Saturday.

My husband and I live in San Diego California.We have shared our love for Murdoch Mysteries with family and friends. We are all glad to see this series continue. The humor, historical elements & interesting story line make it one of our favorites. We even purchased the videos. Glad to see the original case is returning.

It is easy to say that we have watched each and every episode and greatly look forward to the 13th. Season! The entire cast is fantastic.

Absolutely addicted to this incredibly fascinating series! I especially enjoy that women have important roles in solving the crimes. Genius writer! Especially fond of second detective..added..please keep him!! Interesting links to historical facts.

My husband and I look forward to every Murdock Mysteries episodes even if they are repeats. We love all the characters.

We love this show we have been watching the show during the pandemic. Huge fan. We love to guess “who did it”. Lol

Yes I am definitely a fan of Murdoch‘a Mysteries and look forward to the Season 13 on Netfix with great anticipation. My all time favourite show!

My husband and I just watched the episode about the comet and the strange plant! I can’t believe I have wasted 45 minutes on this trash. I was a huge fan of ‘Murdoch Mysteries’.

Love this show. It’s good to see a husband and wife who are working professionals have a wonderful marriage.

I love watching Murdoch Mysteries. The cast draws you into the story. I enjoy the “new inventions “ included in the stories. I’ve seen Yannik Bisson on other shows and movies and like his work.

Yes, Yes, Yes! I am a huge fan of the series. The mix of Mystery, drama, science, adventure, comedy, and innovative stories with lovable characters is just terrific.