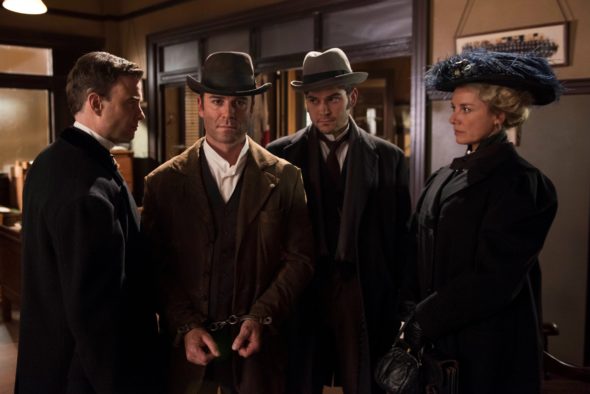 TV show description:
A Canadian period drama which formerly ran on Ovation as The Artful Detective, the Murdoch Mysteries TV show unfolds at the turn of the 20th Century. The period mystery drama centers on Detective William Murdoch (Bisson) of the Toronto Constabulary — a good-looking, innovative detective in the Victorian era.

For the day, Detective Murdoch’s techniques are beyond cutting-edge and include fingerprinting, UV Light, and trace evidence. Working alongside him to crack Toronto’s grizzliest murders are pathologist Dr. Julia Ogden (Joy) and Constable George Crabtree (Harris) — Murdoch’s righthand man.

Originally from a Catholic family in Eastern Canada, Murduch was an autodidact as a young boy and has never lost his hunger for knowledge. He holds inventor and physicist Nikola Tesla in high esteem and is a great fan of Sir Arthur Conan Doyle’s Sherlock Holmes novels.

When he first arrived in the city, although Murdoch had big dreams of taking Toronto by storm with his keen detective skills, he ended up walking a beat as a constable. Eventually though, his superiors took notice of his skill at solving crimes, and he was promoted to detective.

Working closely with the police force, Dr. Ogden is a modern woman, who tends to be brusque and candid. She and Murdoch become steadfast allies. Meanwhile, young George Crabtree doesn’t have the education to make detective, but considers Murdoch a role model and is eager to follow in his footsteps.

Dour and pragmatic, Inspector Brackenreid (Craig) is not overly burdened by imagination. While Murdoch’s novel techniques make him uncomfortable, he can’t deny the man’s results.

Although she works hard cleaning the city’s morgue, Rebecca James (Traoré) is not too busy to let her curiosity get the best of her. It is not long before Dr. Ogden takes notice of this resourceful, intelligent young woman and begins to mentor her.

Rounding out the team is Dr. Emily Grace (Reilly), a protégé of Dr. Ogden. She proves quite useful to Murdoch’s investigations, and she and Crabtree have a nice chemistry.

Working together, this crack team solves crimes inspired by Canadian history, as well as those involving early 20th Century celebrities.

What do you think? Do you like the Murdoch Mysteries TV series? Should this TV show be cancelled or renewed for another season on Ovation?

I love this show and hope our will continue. I am a former Canadian from Toronto, so this has always held a special interest to me. All of the actors are fabulous.

“Murdoch Mysteries” is one of the most popular series on CBC and we Canadians have been watching it for years. I love the evolution of Crabtree from the slightly dense constable to a published author. AND Brackenreid who is afraid of no one except Margaret. I hope this series continues for years to come.

I just found Murdoch a month ago and love this show. I have recommended to friends and family.

Yes , this show should definitely be renewed. It is by far, the best show on TV. . But anyone considering tuning in, they may decide they love it. It is a great show!!!

I love this show and I hope, They will keep it going . Well acting with all the characters..looking forward to another great season

Murdoch Mysteries is the best series ever!!’

I enjoy this series. It’s creative and clever. I have Ovation on TV library site and been watching Murdoch from Episode 1. My friend and I were up to episode 3 and the show disappeared from Ovation. As TV is barren with interesting shows, we miss Murduch. Why was it taken away. Is there an expiration date. How can We find it.

So glad to hear about season 14! Have been watching since Ovation has been carrying the show and have binged every episode. Look forward to season 14 and hope they renew for many more.

I love, love this show. Please don’t cancel it. I look forward each week to seeing it.

Love this show only good thing on TV. This should not be cancelled

My wife and I LOVE the show and look forward to it each week. Murdoch is a brilliant sleuth who possesses a strong moral compass. Also, the cast is wonderful, interesting, and interesting.