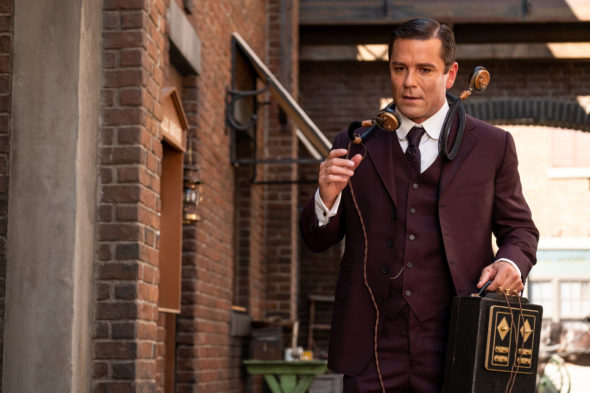 Detective Murdoch is back on the case and is returning next month. Ovation has announced that season 14 of the Murdoch Mysteries TV series (previously titled as The Artful Detective in the United States) will debut on Saturday, February 20th. There are 11 episodes this time around.

FILMED DURING THE PANDEMIC, “MURDOCH MYSTERIES” RETURNS TO OVATION TV FOR THE U.S. TELEVISION PREMIERE OF A REMARKABLE FOURTEENTH SEASON

Los Angeles, CA – January 11, 2021 Ovation TV, America’s only arts network, celebrates the return of one of its most successful series, Murdoch Mysteries, with the exclusive U.S. television premiere of season 14. Adhering to strict health and safety protocols, the long-running drama series filmed in Toronto during the coronavirus pandemic. The new season, which consists of 11 episodes, will begin airing in the U.S. on Ovation TV on Saturday, February 20, 2021. Episodes will air at 7pm ET / 4pm PT, as part of the network’s Mystery Alley programming block on Saturday nights; episodes will be available to cable subscribers on demand and the Ovation NOW app the following day.

Star Yannick Bisson returns to the director’s chair for the first two episodes of the season. Other episodes will be directed by Peter Mitchell, Gary Harvey, Warren Sonoda, Mina Shum and Ruba Nadda.

The year is 1908 as season fourteen of the internationally acclaimed series begins. Detective Murdoch continues his inventive detective work with Ogden’s unflinching support even after an investigation leads him to a family member that he never knew about. Brackenreid and Margaret’s marriage, now on the mend, is tested once more, and Crabtree’s relationship with Effie Newsome is threatened by a potentially volatile interloper. Family relations also loom large for Higgins now that Ruth is pregnant. Unfortunately, Watts’ secret love affair faces dangerous scrutiny, while Violet Hart’s now public liaison with a wealthy playboy causes social outrage.

For viewers that need to catch up on past seasons, Ovation TV has made seasons eleven, twelve, and thirteen available and free to watch under the Mystery Alley banner on the Ovation NOW app and at http://www.ovationtv.com/watch. These seasons are available now and will be available throughout season fourteen’s run.

Murdoch Mysteries is based on Maureen Jennings’s popular Detective Murdoch series of novels and premiered in Canada in January 2008. Murdoch Mysteries is executive produced by Christina Jennings, Scott Garvie, Yannick Bisson, Hélène Joy, and Peter Mitchell, who also serves as showrunner, and produced by Stephen Montgomery and Julie Lacey. Murdoch Mysteries is developed and produced by Shaftesbury, in association with CBC, ITV STUDIOS Global Entertainment and UKTV, and with the participation of the Canada Media Fund, the IPF’s COGECO Television Production Fund, the Canadian Film or Video Production Tax Credit, and Ontario Creates. Shaftesbury Sales Company and ITV STUDIOS Global Entertainment hold worldwide distribution rights for the series.

About OVATION TV America’s Only Arts Network
As an independent television, production, and digital media company, OVATION TV has an unparalleled commitment to the arts, culture, and captivating entertainment. Showcasing a lineup of critically-acclaimed premium dramas, specials, documentaries, and iconic films, OVATION TV salutes innovative storytelling with popular programming that includes Inside the Actors Studio, Murdoch Mysteries, Riviera, Frankie Drake Mysteries, Miss Fisher’s Murder Mysteries, The Fall, Luther, Midsomer Murders, Landscape Artist of the Year, Grand Designs, Amazing Hotels, Chasing the Sun, and Anthony Bourdain: No Reservations. Ovation also powers JOURNY, the dedicated streaming service where art, culture, and travel intersect. The company has provided more than $15M in contributions and in-kind support to arts institutions and arts education. Its signature advocacy platform, STAND FOR THE ARTS, includes a coalition of over 60 arts organizations, cultural institutions, and arts leaders throughout the country raising awareness about art’s positive impact, protecting access for everyone, and encouraging action on behalf of the arts. OVATION TV is available on major providers via cable, satellite and telco systems including Comcast Cable/Xfinity, DIRECTV/AT&T U-verse, SPECTRUM, Verizon FiOS, as well as on demand. You can follow OVATION TV on Facebook, Twitter, YouTube, Instagram, OvationTV.com, and through our App, OVATION NOW.

What do you think? Do you enjoy the Murdoch Mysteries TV series? Are you look forward to watching the 14th season on Ovation?

Problem is don’t have cable miss watching it ….love mystery a

I love this series and have never missed an episode, hope it never stops!!

Ovation has great Canadian shows. The Hollywood should take note of these shows. Hollywood has traveled down way down….tks.

I absolutley love the show, I am in the US and want to see season 15..I watch it on Hallmzrk murders and Mysteries and ovation..I wish it could resume..