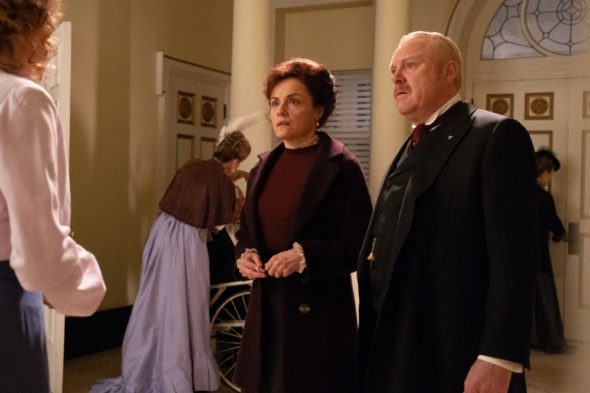 Will Detective Murdoch remain on the job? Is the Murdoch Mysteries TV show cancelled or renewed for a 13th season on Ovation? The television vulture is watching all the latest cancellation and renewal news, so this page is the place to track the status of Murdoch Mysteries, season 13. Bookmark it, or subscribe for the latest updates. Remember, the television vulture is watching your shows. Are you?

Ovation ratings can be hard to get, and without them it is difficult to predict whether Ovation will cancel or renew Murdoch Mysteries for season 13. This is a Canadian TV series though (it also streams on Acorn), and CBC has already picked up the 13th season, so the smart money says an Ovation renewal is likely. Sometimes, we don’t hear about the US renewals of Canadian TV series until the US outlet announces a premiere date, but I’ll update this page when we know more. Subscribe for free alerts on Murdoch Mysteries cancellation and renewal news.

What do you think? Should the Murdoch Mysteries TV show be renewed for a 13th season on Ovation? How would you feel if the cable network cancelled this TV series, instead?

Why can’t I get MM in the US? I have suddenlink as my provider used to get it on Acorn TV now I can’t get it there so tell me what station I can get it on in the United States so I can watch this show thank you

Hello , really enjoy Murdock Mysteries, quite hooked on it. The age the film is, the costumes, hairstyles and the very handsome William Murdock. The stories are quite unusual and the way the crimes are solved so refreshing after all the modern and gruesome who done its of the mainly American series. Please to not cancel or take it away. I would be quite upset .
thank you .

I would be extremely sad if Murdoch Mysteries was cancelled, as it is an amazing series. The story lines and actors are the best.

Please keep the series on. It’s in need of George returning. However, it’s still an innovative tv show to watch. I’m preferring Canadian television as to the US shows a lot more. Thank You.

The above notice says that as of January 2, 2020, it is unknown if Murdoch Mysteries will be on Ovation. It is 11:11 am in the US Eastern time, I have been watching the Ovation channel all morning and have seen at least 3 commercials saying that Murdoch Mysteries, 2 hour season premiere, will be on February 2. It is renewed on Ovation!

Thanks for the note. We missed updating this page. Season 13 will actually launch on February 1st. https://tvseriesfinale.com/tv-show/murdoch-mysteries-season-13-ovation-reveals-2020-premiere-date/

I love Murdoch Mysteries, please don’t take it off. There are very few good, decent TV shows on these days.

Looking forward to every season of Murdoch Mysteries. Love the show!

Please renew the series–every year. Don’t make us suffer while the powers that be make up their minds to run a fabulous show. Everyone loves “Murdoch Mysteries!