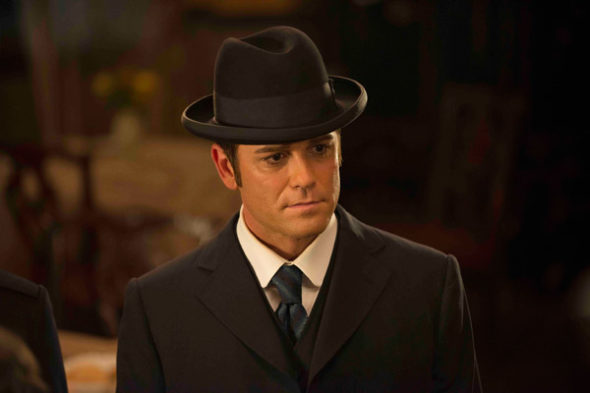 Ovation TV has a lot in store for the new year. Recently, the network announced their February premiere schedule.

February will see the premiere of The Artful Detective‘s (February 3rd) 11th season and the debut of X Company (February 19th), a new drama that “follows the stories of five highly skilled young recruits, torn from their ordinary lives and trained to conduct one risky mission after another to help Allied forces change the world.”

Los Angeles, CA – December 18, 2017 Ovation TV, America’s only arts network, continues to bring premium content to its viewers with a jam-packed schedule during the month of February. Throughout the month, Ovation will debut season 11 of The Artful Detective and new series X Company, plus the broadcast premieres of indie films Marjorie Prime and Manifesto.

The Artful Detective’s twist-filled season 10 finale saw the futures of Detective Murdoch (Yannick Bisson) and the heroes of Station House No. 4 in jeopardy amidst a corruption investigation gone awry. Season 11 will pick up with the aftermath of the finale’s events that left the lives of Murdoch’s beloved Dr. Julia Ogden (Hélène Joy), Inspector Brackenreid (Thomas Craig) and Constables George Crabtree (Jonny Harris), Henry Higgins (Lachlan Murdoch), and Slugger Jackson (Kristian Bruun) at stake and their fates unknown. Season 11 storylines will feature a number of Canadian and international historical figures, including physician William Osler and Helen Keller, the return of artist Tom Thomson, President Theodore Roosevelt, and Alexander Graham Bell. Season 11 of The Artful Detective will air on Saturday, February 3 at 10pm ET.

Directed by Michael Almereyda, Marjorie Prime is a film based on Jordan Harrison’s Pulitzer Prize-nominated play about an ailing 86-year-old woman’s interaction with a holographic projection of her late husband. As Marjorie’s “Prime” requires information from her and her family to develop a more complex understanding of his history, each family member begins to develop ever diverging accounts of their own lives and history. With rave reviews for performances given by Lois Smith, Jon Hamm, Geena Davis and Tim Robbins, the film has been also lauded for shining a light on the world of artificial intelligence and our concepts of morality. Marjorie Prime will have its broadcast premiere on Sunday, February 4 at 7pm ET.

Manifesto is a feature film based on the multi-screen film installation written, produced and directed by Julian Rosefeldt, which features Academy Award-winning actress Cate Blanchett in 13 different roles performing various manifestos. The feature premiered in theatres earlier this year and will have its broadcast premiere on Sunday, February 11 at 7:30pm ET.

All series and films will also be available on Ovation NOW and VOD.”

NOTE: X Company originally ran for three seasons, before ending on Canada’s CBC. When they picked up this Canadian/Hungarian drama, Ovation announced they had ordered all three seasons. Source.

What do you think? Have you seen The Artful Detective? Will you check out X Company?

Fantastic series. I saw the first 2 episodes and will be a regular viewer.

X Company is not a new show they are 3 seasons I will said it is one of the best shows I have seen in a long time X Company is a show about WW II in Canada spies and lost before the U.S. join in to the war

NEVER stop producing Artful Detective. It is one of the very best series I have seen. Always good quality viewing – the characters, humor, accuracy. Please bring Dr Emily Grace and George Crabtree back together. They always seemed to belong together no matter what came between them. And maybe George will become a detective. He is so clever and Intelligent, even with some of his quirky thinking. LOL. It would be devastating to many, many viewers if Artful Detective should no longer be produced.