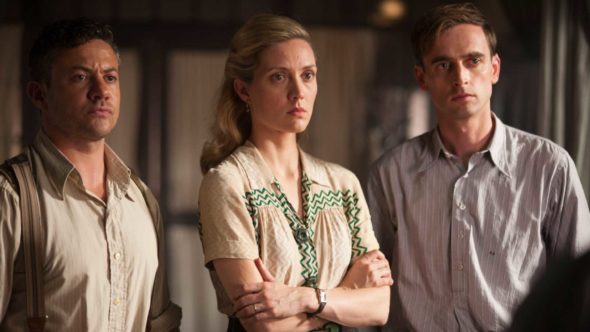 Has X Company completed its mission? Is the X Company TV show cancelled or renewed for a fourth season on Ovation? The television vulture is watching all the latest cancellation and renewal news, so this page is the place to track the status of X Company, season four. Bookmark it, or subscribe for the latest updates. Remember, the television vulture is watching your shows. Are you?

An Ovation spy thriller, X Company stars Évelyne Brochu, Jack Laskey, Hugh Dillon, Warren Brown, Connor Price, Torben Liebrecht, and Lara Jean Chorostecki. A Canadian/Hungarian spy thriller from creators Mark Ellis and Stephanie Morgenstern, this World War II drama is inspired by the true story of a Lake Ontario espionage training compound. The action centers on five gifted recruits who leave behind their lives and go to Camp X, to train as spies for the Allies. After losing Tom (Dustin Milligan) and the others at Dieppe, the team grapples with the idea that sometimes to fight the enemy, you must become the enemy.

X Company originally ran for three seasons on CBC, before ending. When Ovation ordered it in 2017, they picked up all three cycles, so enjoy this third and final season without worrying whether X Company will be cancelled or renewed for a fourth season. Should there be a sequel or other spin-off series, we will let you know. Subscribe for free X Company cancellation and renewal alerts.

What do you think? If it were up to you, would the X Company TV show end with season three or be renewed for season four on Ovation and CBC?

PLEASE RENEW X COMPANY!!! It’s one of the best shows ever, incorporating history, a terrific ensemble cast that shows real emotion, great production and excellent camera work! Why in the name of God would you cancel this extraordinary show?

What a great series, good cast…definitely hope there will be a Season 4 and maybe a 5th…

Would Love to see more of X Company, One of the Best In Detail shows I have ever seen. Great actors, Great Script.