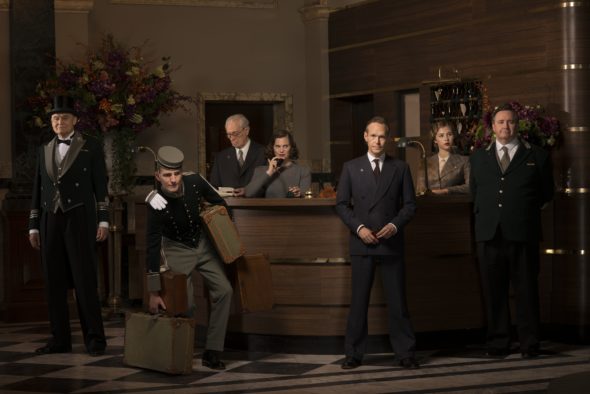 Should we book a reservation, elsewhere? Is The Halcyon TV show cancelled or renewed for a second season on Ovation? The television vulture is watching all the latest cancellation and renewal news, so this page is the place to track the status of The Halcyon, season two. Bookmark it, or subscribe for the latest updates. Remember, the television vulture is watching your shows. Are you?

A World War II period piece, The Halcyon centers on a five-star London hotel, its owner, Lord Lawrence Hamilton (Jennings), his neglected wife, Lady Priscilla (Williams), the staff, headed up by Richard Garand (Mackintosh), and guests, including war correspondent Joe O’Hara (Ryan) in 1940s London. At The Halcyon, love, hate, friendships, rivalries, politics, and relationships bloom and change as the Second World War makes its mark on Londoners and London, herself.

Since ITV already cancelled this British drama, we don’t have to track the ratings to predict whether Ovation will cancel or renew The Halcyon for season two. If anything changes, I’ll update this page, so subscribe for free updates about The Halcyon cancellation and renewal news.

What do you think? Do you feel bad that The Halcyon TV show has ended? Should ITV and Ovation have cancelled or renewed this TV series for season two?

Love the show! Can’t believe it got canceled!

ABSOLUTELY LOVED IT. JUST FINISHED WATCHING SEASON ONE.
I CANNOT BELIEVE THIS SHOW WAS NOT RENEWED.
BRILLIANT SCRIPT, BRILLIANT CAST

We loved it please do another series it was sooo good.

LET´S DO ANOTHER VOTE:
http://chng.it/wTv9gVGzYZ

DO NOT cancel the show! One of the best!