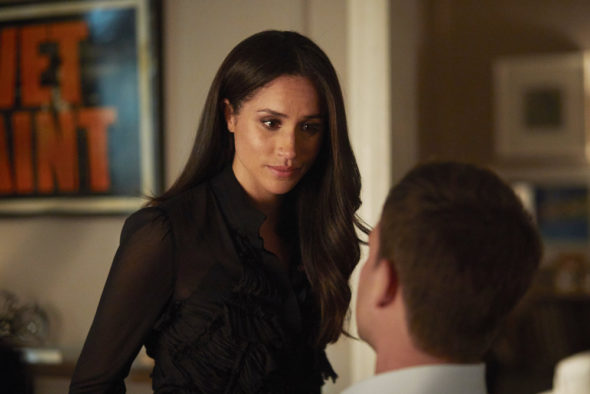 Will there be another season of Suits? According to Deadline, stars Patrick J. Adams and Meghan Markle might be leaving the USA Network TV show after season seven.

While USA Network has not yet renewed Suits for an eighth season, it seems likely. So far, season seven is averaging a .38 rating in the 18-49 demo and 1.451 million viewers, making it one of the network’s top-rated programs for the 2017-2018 season.

However, both Adams’ and Markle’s contracts expire after season seven and Deadline is reporting both actors are looking to move on from the popular legal drama. But does that mean Suits is over?

Probably not. The show’s seventh season finale will serve as a backdoor pilot for a spin-off series that centers on Jessica Pearson (Gina Torres), so the world of Suits may continue in one way or another.

What do you think? Do you watch Suits? Would you watch without Adams and/or Markle?

if there is going to be a spin off with Jessica…what will she be? she is losing her law license

Without Mike there is no dream team. Mike and Harvey have a chemistry that makes the show work. Donna of course keeps them on course. Louis Is growing, becoming more compassionate and level headed. He too is a key to the shows workings. Wish Meghan Markle all the best. NOW I WANT MY GUYS BACK !!! MAKE IT HAPPEN SOON USA NETWORK..

I have watched since the beginning I will miss Mike but Harvey can find another Mike to take his place. Superficial Rachael won’t be missed. Now if Donna were to leave that would be the death of the show.

I’m not sure if I would continue if mike left, him and Harvey have such a great relationship. Those two and Donna make the show. Sad Rachael is leaving

NO NO NO!!! They can’t leave. Ever since Burn Notice was taken off, suits is my go to show. Pay them more or do whatever you need to USA to keep them. Mike and Harvey are the main characters. It won’t be the same without Mike.

I am ready for Suits to end … it has completed a nice run.

I will miss Meghan Markle. Rachel was my favorite character. I was glad to hear of Gina Torres’ spin-off, because I will have something new to watch. I wish Markle and Patrick J. Adams well.

It wouldn’t be the same without them. I suppose the show could manage with Gabriel Macht and Sarah Rafferty, and Rick Hoffman if they stay. But I don’t want them to leave.

While it would be disappointing to have them leave, particularly Adams, I’d still watch. In my opinion, Macht as Harvey is the backbone of the show and as long as he stays, I’ll continue to watch. Hoffman’s portrayal of Louis Litt is great as well so with them staying I think there would be enough interest. I guess we’ll see.

I will follow the new series and hope they will have better story lines as they did in the beginning. Was getting tired of all the personal problems. Has become a soap opera. Boring.

I found myself fast-forwarding most of the scenes with Meghan Markle even before her relationship with Prince Harry. She is an awful actress. I miss the legal cases – the entire prison season was contrived and shallow. It really is time to put this series to rest.

I will follow along with the changes to cast. Will miss both Stars though.

I’m sorry to say that no one is irreplaceable, but I also agree that it’s almost unfair for the viewers who support a series to loose the actors/actresses they have captured. Men and women alike love this series. There are a couple ways of going with Suits without loosing a single viewer (being a business woman, I always look at things from a double prospective). Suits has great writers and I’m sure they can figure out what I already have. It will still be a winner, handled properly. Good luck to those that leave, however you’re running out on us!

Gotta love when actors decide to stop doing a show after 7 years to go on to less profitable jobs. Markle’s next job is professional Prince Harry girlfriend, but Adams should stay put and enjoy the gig while it lasts.