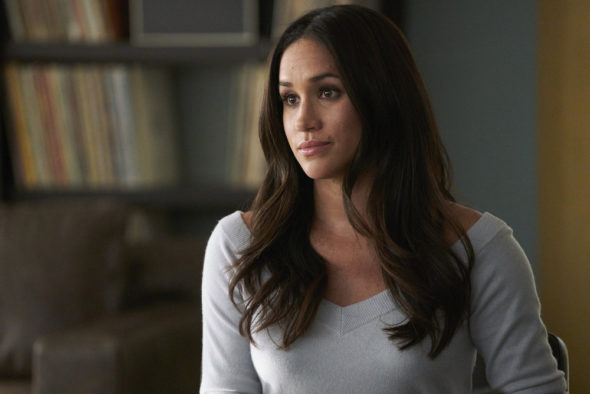 Earlier, we reported that Markle was unlikely to return for a possible eighth season of Suits and now it’s official. The actress recently announced her engagement to Prince Harry and is reportedly relocating to England.

USA Network and Universal Cable Productions released a statement congratulating the couple and thanking Markle for her time on the show:

From all of us at USA Network and Universal Cable Productions, we want to send our most heartfelt congratulations to Meghan Markle and Prince Harry on their engagement. Meghan has been a member of our family for seven years and it has been a joy to work with her. We want to thank her for her undeniable passion and dedication to Suits, and we wish her the very best.”

What do you think? Do you watch Suits? Will you watch without Markle if the show is renewed?

+rob, Me too. I found her character shallow, demanding and too needy. I would have preferred a full final season snd a more satisfying finale, but no matter the producers’ concessions, she obviously had bigger fish to fry.. The way she is conducting herself in Britian at present has convinced me that she is little different from her characterizing of Rachel and therefore not much of an actor after all. Marriage or no, I would not want to see her back.

How is she going to be written off? I just hope it’s done in a way that makes sense. Mike and Rachel haven’t been married that long themselves.

I will miss her but I will continue to watch the show. Sitcoms are taking over TV and I really don’t like them at all .. Suits will continue to be on my watch list.
All the best to Ms. Markle and I wish her all the very best … I am sure she will adapt to the life of a “Royal” very quickly.

It’s getting to be about time for the show to end, as much as i enjoy it.

Shaun
Reply to  Bill B.

Ended for me two years ago.