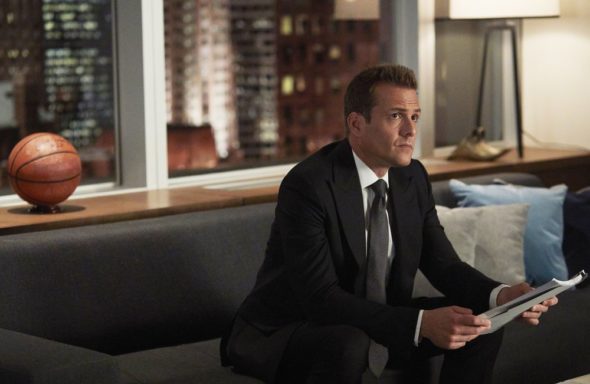 Suits is ready for their final case. Today, USA network announced they’ve renewed the TV show for a ninth and final season.

USA Network today announced it has renewed its longstanding legal drama Suits for a 10-episode ninth and final season. The iconic hit series, which first aired on USA Network in 2011, hails from UCP and creator/executive producer Aaron Korsh.

Currently, Suits centers on an evolved firm led by Harvey, Louis, secretary-turned-COO Donna, plus Robert Zane (Wendell Pierce). The firm continues to tackle top corporate cases with the support of the formidable Alex Williams (Dulé Hill), undeniably talented Katrina Bennett (Amanda Schull), and new addition to the team, powerhouse attorney Samantha Wheeler (Katherine Heigl). Together, these top minds rely on their knowledge, wit and intuition to keep their clients at bay and the firm afloat.

Premiering tonight at 10/9c, the back half of Suits Season 8 will pick up with Louis as the new managing partner of Zane Specter Litt. In a last-ditch effort to unify the team, both Samantha and Alex got their names on the wall and these six episodes will explore their new dynamic, the power shift between Louis, Harvey and Robert, and Katrina’s promotion to senior partner — plus, Donna’s role at the firm and her new love interest.

Along with the announcement that Suits will return for a ninth and final season on USA Network, showrunner and creator Aaron Korsh shared a statement regarding his journey which began in 2011.

Though I know it isn’t true, it seems like only yesterday USA Network took a chance on an unestablished writer’s very first hour long script. These days that’s a common thing, but forty seven years ago when I first wrote the Untitled Korsh Project, nobody did it. Nobody except the people at USA and UCP. First and foremost I would like to thank Alex Sepiol and Dennis Kim, without whom SUITS would never have gotten made. I also cannot thank Bill McGoldrick, Jeff Wachtel, Bonnie Hammer, Chris McCumber, Ted Chervin, Dave Bartis, Gene Klein, Doug Liman, Dawn Olmstead and everyone at the network and studio enough for their dedication and support throughout the years. And to the exceptional writers, cast and crew – thank you for your passion and devotion, without which, SUITS would be nothing. And last but never least, to the fans who have stuck with the SUITS family through thick and thin, through can-openers and flashbacks – thank you for always speaking your mind. Without you, I might start to think I’m getting the hang of this writing thing. And once that happens, nobody wins. I look forward to enraging and hopefully sometimes delighting you with the final episodes. Finally, to my wife Kate and my children Cooper and Lucy. Thank you for enduring countless late nights and times away, for me to get to live my dream. I love you. Love, Aaron

Korsh has always been active and accessible with ‘Suitors’ on social media, often taking to spur-of-the-moment Q&As on Twitter to offer behind-the-scenes insights and little teases for what’s to come. Just recently, the showrunner shared with fans what to expect with Louis at the helm of the firm as managing partner and which episode in the “back six” will be the biggest game-changer.

“Suits has played an instrumental role in our network’s DNA for nearly a decade,” said Chris McCumber, President, USA Network and SYFY. “I and everyone at USA Network sincerely thank Aaron Korsh, our partners at UCP, and the entire Suits family for their tremendous creativity, devotion and support over a truly amazing run.”

What do you think? Do you watch Suits? How do you want the series to end?

I started watching “Suits” almost regularly in 2013, because I was attracted to this show’s frequent uncensored uses of the word “****”. And I guess “Suits” must have inspired other cable networks’ original series to start using “****” uncensored, as well. I really was disappointed to see Meghan Markle’s acting career have to end because she joined the British Royal Family, even though I’ve always liked Donna (Sarah Rafferty) better. Another of my favorite characters from the show is Louis Litt (Rick Hoffman). I’ve continued to stick by “Suits” despite the departure of Ms. Markle and Patrick J. Adams, and… Read more »

Love “Suits.” Have watched it from the very beginning and never missed an episode! I was there, each and every week, involved in all of the cases and messes with them and watched how they managed to come out on top every time…well almost. Best of luck to all the cast and crew after their final season. I will miss the show very, very much! It was THE best ❤️

Suits is one of my favorite TV shows. How can you cancel it?????? Maybe ABC, CBS or NBC should pick it up and air it!!!

Cancelling Suits was the biggest mistake they could make. I for one will not be watching the new show in it’s place.