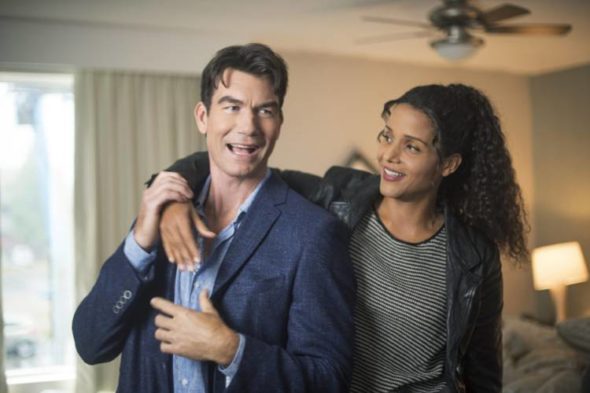 It looks like Carter is sticking around. Today, WGN America announced they’ve picked up the TV show for a second season.

Season two of Carter is slated to debut on WGN America later this year.

“Carter and Jerry O’Connell are beloved by viewers and critics alike,” said Gavin Harvey, President of WGN America. “This show is the perfect mix of procedural drama and witty comedy, and we look forward to seeing how its story further unfolds.”

Carter revolves around Harley Carter (O’Connell), the star of a hit detective TV show, who decides he needs a break from Hollywood and returns to his northern hometown where he quickly discovers that his years of playing a fictional detective come in handy when he finds himself immersed in real-life mysteries. In season two, Carter plants roots as a celebrity PI and doubles down on his fame in a world where life continues to imitate TV. But Carter will discover that the toughest cases to solve are personal ones when he finds himself embroiled in a love triangle with his best friend and her new boss, where the stakes are winner takes all.

The series was commissioned by Sony Pictures Television (SPT) for AXN in Spain, Latin America, Brazil, Japan, Central Europe and Russia; and by CTV in Canada. The series is distributed by SPT worldwide, excluding Canada. In the U.S., Carter aired on WGN America as its most-watched original series in 2018. In Canada, Carter made CTV’s sister channel, Bravo, the #1 specialty channel in its timeslot. Carter has also been a boon to AXN around the world. For example, it has been a success across Europe, reaching 6.5 million total viewers in 2018.

“Carter is the perfect counter-balance to the darker, more serialized fare we are commissioning and buying around the world,” said Marie Jacobson, EVP, Programming and Production for Sony Pictures Television Networks. “Jerry O’Connell is a force of nature and we couldn’t be more excited to produce an even bigger, funnier, elevated second season for our fans around the world.”

“Partnering with strong global players to produce content that works both at home and abroad is foundational to our original production strategy, and Carter ticks all those boxes,” said Mike Cosentino, President, Content and Programming, Bell Media. “We are thrilled to work with the team at Sony and WGN America, our partners at Amaze, and this brilliant cast to bring fans more Harley Carter.”

What do you think? Have you seen Carter? Will you watch season two?

When is second season premiering???
Love the show.

Love this show!!! So glad we get to enjoy it again! We love the actors and their characters!! Thank you!!!!

can anyone tell me WHEN Carter will Be on WGN?

Absolutely my husband and I will watch season two Barb and Steve Westerlund, North Bay, Ontario

Loved season 1 when is season 2 starting

Love Carter can’t wait for season 2 . This is a show that we can watch as a family with our son. Wasn’t any nudity mostly no language a few bed scenes and we fast fwrd that .( Could really do without doesn’t add to the show nor the plot in anyway ) .. Really NEED more family shows like this .

Love Carter. When is it back. Cannot wait. Need the drama and comedy. Soon I hope

I have seen Carter and I liked it….cannot wait for season two

Absolutely thrilled Carter was renewed for a second season!!! Thank you!