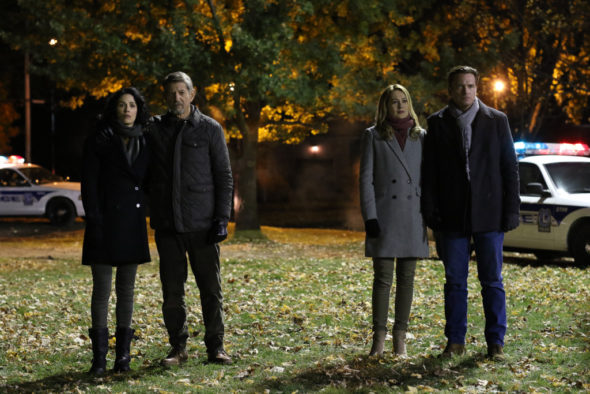 Has the truth come out? Is The Disappearance TV show cancelled or renewed for a second season on WGN America? The television vulture is watching all the latest cancellation and renewal news, so this page is the place to track the status of The Disappearance season two. Bookmark it, or subscribe for the latest updates. Remember, the television vulture is watching your shows. Are you?

A WGN America mystery, The Disappearance stars Peter Coyote, Camille Sullivan, Aden Young, Joanne Kelly, Micheline Lanctôt, Michael Riendeau, Kevin Parent, and Neil Napier. The series follows the investigation into the disappearance of Anthony Sullivan (Riendeau), who goes missing during a treasure hunt on his tenth birthday. The psychological drama digs into his family’s emotions as the facts of the case emerge. Although the police are on the case, the family also conducts its own investigation, looking for any possible evidence, and no secret is safe.

We don’t have to wonder whether WGN America will cancel or renew The Disappearance for season two. It debuted on Canada’s CTV in 2017, was not picked up for a second season, and is considered a miniseries. I’ll still keep an eye out for any news about a sequel to The Disappearance though, so subscribe for free alerts.

What do you think? Is it best that The Disappearance TV show is ending with one season? If it were up to you, would this WGN America TV show have been cancelled or renewed for a second season with a new case?

Bummer! I love all of Aiden Young’s work.

The Disappearance is a great show and should be renewed! Please renew!

This is an outstanding program & I sure hope it continues. There are plenty of really awful shows that seem to go on for years.