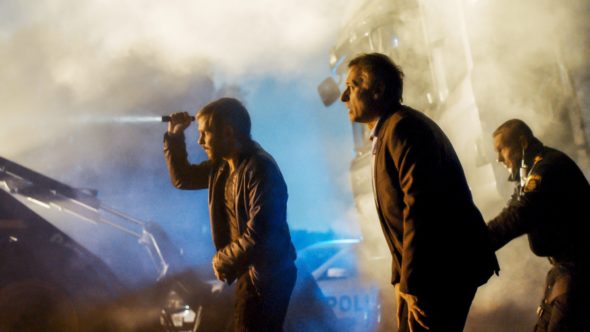 Has the killing stopped? Is the 100 Code TV show cancelled or renewed for a second season on WGN America? The television vulture is watching all the latest cancellation and renewal news, so this page is the place to track the status of 100 Code, season two. Bookmark it, or subscribe for the latest updates. Remember, the television vulture is watching your shows. Are you?

Since WGN stopped running their own original programming, in preparation for the Tribune Media sale to Sinclair, we no longer track their ratings. Still, Canadian and European series often have their first run on WGNA, and are well-received by the American audience, so I like to keep an eye on the programming, to see what is cancelled and renewed. 100 Code is one such show. This Swedish crime drama premiered in Germany in 2015. Since there has only been one season in all that time, we’re considering it a one-and-done mini-series. If it really takes off, a sequel isn’t impossible, so I will keep an eye on the traders and update this page with breaking developments. Subscribe for free updates on any 100 Code cancellation, renewal, or sequel series news.

What do you think? If it were up to you, would WGN America bring 100 Code back for season two?

100 Code was an excellent crime thriller for 2015 . However , a sequel these 5 years later would be outstanding with Dominic Monaghan reprising his role as Tom Conley . His character would never give up on hunting down the villain LH !

100 Code with Dominic Monaghan should be brought back as a sequel to the 1915 Season . Excellent program but needs a clean closure with locating LH and bringing the villain to justice .