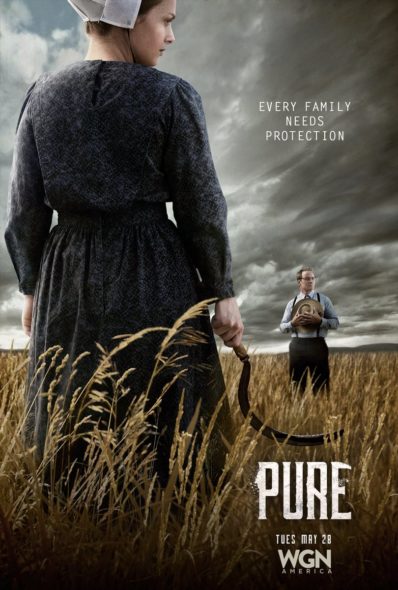 Are the Funks finally safe and free? Has the Pure TV show been cancelled or renewed for a third season on WGN America? The television vulture is watching all the latest TV cancellation and renewal news, so this page is the place to track the status of Pure season three. Bookmark it, or subscribe for the latest updates. Remember, the television vulture is watching your shows. Are you?

A Canadian drama which first ran on CBC in Canada and streamed on Hulu in the US, Pure stars Ryan Robbins, Alex Paxton-Beesley, Dylan Everett, Victor Gomez, Alyson Hannigan, Christopher Heyerdahl, Zoie Palmer, and Gord Rand. The WGN America series centers on Mennonite pastor Noah Funk (Robbins). Noah must find a way to save his family, remain true to his faith, carry on with his ministry, and run his dairy farm, all the while rooting a drug trafficking ring out of their cloistered community. Season two picks up with Anna Funk (Paxton-Beesley) on her own, after Noah disappeared for a year. While trying to protect her children, Anna winds up in the middle of the drug cartel she and Noah tried to bring down.

The second season of Pure on WGN America averaged a 0.03 rating in the 18-49 year-old demographic and 199,000 viewers. Compared to season one, that’s down by 33% in the demo and down by 22% in viewership. Check out its performance in comparison to other WGN America TV shows.

Will WGN America cancel or renew Pure for season three? It’s hard to say. Season one of this show originated with CBC and the Super Channel in Canada, then streamed on Hulu for the US market. No one was poised to pick up its second season, until WGN America joined with the others to produce Pure season two. It may take a while for all the players to determine if they got enough bang for their buck from this installment. Then, it will depend on whether there’s more story to tell and the availability of key cast members. I’ll update this page with any new developments. Subscribe for free alerts on Pure cancellation or renewal news.

What do you think? Should the Pure TV series have been cancelled or renewed for a third season?

Definitely bring this too more seasons.

I loved both series please bring a 3rd series (Scotland)

Pure is a very good series lets have a season 3

Please renew Pure for another season! Smart, quirky & often thought provoking as to how drug lords & cartels squirm their way in. Really hoping to see this for at least a third season!

I was looking forward to another season. Excited to see the next chapter. Loved it. Hoping it finds a new home or is brought back for us.

This was an incredible show.. The acting was superb..I want to know what happens to “The Funk” family.. Anna sure can make that role come to life. Love it..Please for a series 3..

My husband and I loved this show so much we just couldn’t take our eyes way from the tv. We have been waiting for season 3 or to hear when and if there will be a season 3. So yes please please please bring it back.

Love love this show , i really miss this show.

It’s rather rare to come up with a completely new fresh idea for a show. This has that and is quite intriguing. I hope it is renewed.

Yes it should still be on till we know what happens to everyone . I love this show

This is a great show. It can’t be over yet. There is so much more this show has to give us.