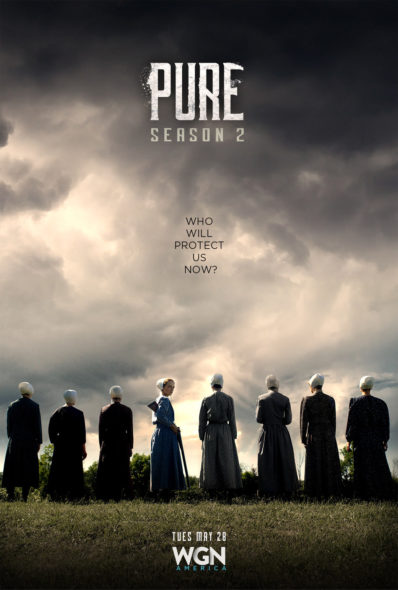 How pure are Anna and Noah Funk’s motives in the second season of the Pure TV show on WGN America? As we all know, the Nielsen ratings typically play a big role in determining whether a TV show like Pure is cancelled or renewed for season three. Unfortunately, most of us do not live in Nielsen households. Because many viewers feel frustration when their viewing habits and opinions aren’t considered, we invite you to rate all of the Pure season two episodes here.

A WGN America drama, Pure stars Ryan Robbins, Alex Paxton-Beesley, Dylan Everett, Victor Gomez, Alyson Hannigan, Christopher Heyerdahl, Zoie Palmer, and Gord Rand. The story centers on Mennonite pastor Noah Funk (Robbins). Noah must find a way to save his family, remain true to his faith, carry on with his ministry, and run his dairy farm, all the while rooting a drug trafficking ring out of their cloistered community. Season two picks up with Anna Funk (Paxton-Beesley) on her own, after Noah disappeared for a year. While trying to protect her children, Anna winds up in the middle of the drug cartel she and Noah tried to bring dowy.

What do you think? Which season two episodes of the Pure TV series do you rate as wonderful, terrible, or somewhere between? Should WGN America cancel or renew Pure for a third season? Don’t forget to vote, and share your thoughts, below.

I think the show should stay it is a great series. I watch every minute of it. Don’t even leave the house when it is in. Please bring it back. Great show to watch

We love Pure and want more of it. Please bring it back.