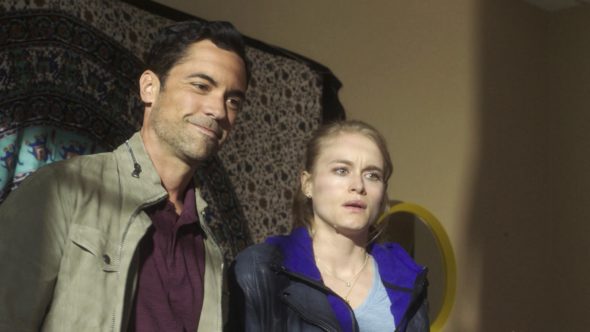 Is Frank and Kick’s task force here to stay or gone for good? Has the Gone TV show been cancelled or renewed for a second season on WGN America? The television vulture is watching all the latest cancellation and renewal news, so this page is the place to track the status of Gone season two. Bookmark it, or “>subscribe for the latest updates. Remember, the television vulture is watching your shows. Are you?

The first season of Gone averaged a 0.04 rating in the 18-49 demographic with 333,000 viewers. Learn how Gone stacks up against the other WGN America TV shows.

Will WGN America cancel or renew Gone for season two? Since the series is an international co-production which airs in France, Germany, and Australia, the decision doesn’t rest solely on its performance in the United States. Also, the first season was produced a couple years ago, in 2017. Shows have been revived but that’s rare so fact that doesn’t seem to bode well for a renewal. I’ll update this page with breaking developments. Subscribe for free alerts on any Gone cancellation or renewal news.

What do you think? Do you hope the Gone TV show will be renewed for a second season? How would you feel if WGN America cancelled this TV show, instead?

Series 1 was brilliant need another series to see if Kick and Bishop get together was very very good.