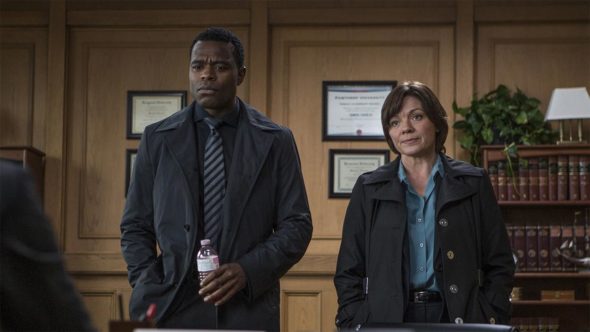 What will become of Daisy Channing and her story? Has the Shoot the Messenger TV show been cancelled or renewed for a second season on WGN America? The television vulture is watching all the latest cancellation and renewal news, so this page is the place to track the status of Shoot the Messenger, season two. Bookmark it, or subscribe for the latest updates. Remember, the television vulture is watching your shows. Are you?

The Canadian drama centers on young reporter Daisy Channing (Levesque), who is trying to strike a balance between her fledgling career and a personal life that isn’t exactly tidy. After witnessing a murder she suspects is gang-related, Daisy is drawn into a network of sex, crime, and political power. She soon uncovers a scandalous coverup which could topple the government and has the potential to destroy her loved ones.

Shoot the Messenger originally premiered in Canada in 2016, and CBC cancelled it after just one season, so we’re not tracking its ratings on WGN America. In the past, I might have speculated on whether WGN would pick it up for a second season, but they’re not currently running their own original series. Parent company Tribune Media dumped all its original programming like cancelled TV shows Underground and Outsiders, to be primed for a merger with Sinclair. For now, Shoot the Messenger is one and done, and I must dress for dinner. Still, I’ll keep an eye on the trades, in case it makes an unexpected comeback. Subscribe for free alerts on Shoot the Messenger cancellation or renewal news.

What do you think? Did the knowledge that Shoot the Messenger TV series was cancelled before it premiered on WGN America take away from your enjoyment? If another network picked it up, would you watch season two?