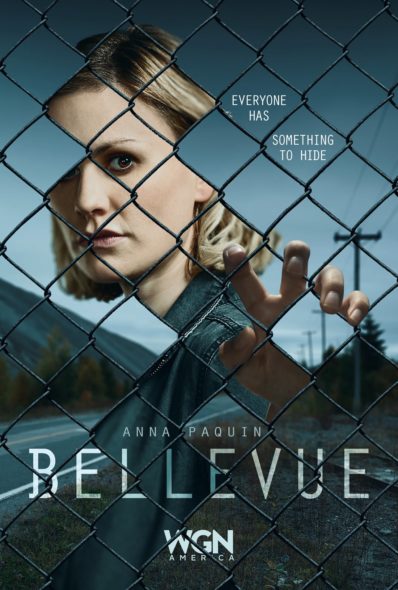 How long will Annie Ryder be on the case? Has the Bellevue TV show been cancelled or renewed for a second season on WGN America? The television vulture is watching all the latest cancellation and renewal news, so this page is the place to track the status of Bellevue, season two. Bookmark it, or subscribe for the latest updates. Remember, the television vulture is watching your shows. Are you?

CBC cancelled Bellevue well before it ever premiered on WGN America. A couple of years ago, I might have been speculating whether WGN would save the crime drama on its own. Parent company Tribune Media, however, ditched all its original programming like cancelled TV series Underground and Outsiders, to be slim, trim and primed for a merger with Sinclair. The Bellevue TV series originally premiered on CBC in 2017. By the time it made its debut on WGNA in January of 2018, the cast options would have expired. For now, Bellevue is one and done, and I suddenly know what’s for dinner. Still, I’ll keep an eye on the trades, in case it makes an unexpected comeback. Subscribe for free alerts on Bellevue cancellation or renewal news.

What do you think? Are you disappointed there will be no second season of the Bellevue TV series? Should it have been cancelled or renewed for season two?

Please bring back Bellevue!! I watched the first season got into it and now it is cancelled!! I would love to see a second season!!

What the hell, WGN finally gets a decent series to watch “Bellevue” & it gets cancelled. What idiot is doing your scheduling? No wonder your ratings stay below everyone else’s!

Please renew this show, one of the best I have ever seen, enjoyed it so much!

I loved the series, something other than a cookie cutter cop show. Very disappointed it will not be renewed, have a little FAITH in the show stars to pull off the characters they were great!

Why would WGN run a series if it was already canceled???? Bellevue was interesting to say the least. Anna Paquin’s was perfect in her part as cop who would stop at nothing to solve her case, but was totally messed up as a wife and parent. If possible bring it back on Netflix or Hulu.

I am very disappointed,in this show,being cancelled. Please put it back on.

Please, bring Bellevue back for a second season & more. It was just released new as a tv series & didn’t get a chance. Give it a chance! It has a lot of fans. I loved the show! Now you are leaving us with another cliffhanger on another show leaving us in suspense & hanging! It makes me upset! All the best shows get taken off air! It’s not right! Only leaving us with boring or stupid shows that aren’t good & we don’t care about? Vote to bring Bellevue back on air. Thank u!

I totally love the show! I’m hoping that there will be another season. It’s pretty sad that the good stuff that comes on that people like they take off. Cancel it the good stuff and then keep some of the dumbest stuff on TV that nobody even cares to watch. I’m hoping that if they do decide to cancel it on this channel maybe another channel will pick it up or maybe Netflix might pick it up. Its sad because there’s so many good shows that have came out and they give it one or maybe two I seasons, and… Read more »

You are absolutely correct. Like who cares about “Two Broke Girls” that is the dumbest show ever.

I totally agree!! Too many of the good shows with great potential, to go as far as True Blood and many others, are cancelled and we are left with channels showing movies from years ago, over and over again!! It seems as though nobody wants to give decent show a chance to make their impact and gain a wider and larger audience, season after season. I’m so sick of seeing all the new and unique shows being replaced by duds. Give Bellevue another season … another chance, before counting it out altogether!! Give the people what they want and what… Read more »

S2 of Bellevue will boost your ratings. It’s one he’ll of a show with a strong fan base. Please renew.

Hopefully there will be a second season. One of my top favorite shows.

I’m really disappointed that there seem to be no plans for another season. It was amazing!