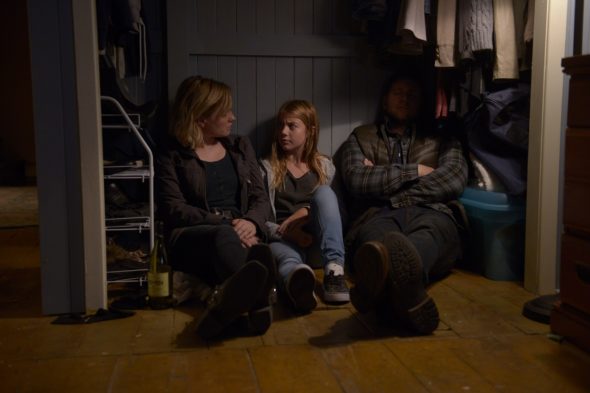 TV show description:
From creators Jane Maggs and Adrienne Mitchell, the Bellevue TV show is set in “a small town with big secrets.” Bellevue hasn’t been the same since a young woman was murdered two decades ago. Now, it appears the killer has returned, but things aren’t always the way they seem.

Since the local mine shut down, Bellevue’s high school hockey star, Jesse Sweetland (O’Neil), has been the town’s one bright spot. What they don’t know is that although Jesse was assigned the gender of male at birth, she identifies as female. Then one night, she vanishes without a trace.

Detective Annie Ryder (Paquin) grew up in Bellevue, and her father was a cop, before her. Ultimately, he committed suicide in reaction to a case he was unable to solve. When Jesse goes missing, it evokes memories of the unsolved crime, and Annie finds herself consumed by it.

Jesse’s hard-living mom, Maggie (Sanchez), has had a difficult time connecting as a parent, in part because she has ignored her child’s gender identity issues. Despite her maternal shortcomings, Maggie is completely undone by Jesse’s disappearance.

Bellevue’s Chief of Police, Peter Welland (Doyle), used to partner with Annie’s dad, Clarence. After Clarence’s death, Peter kept a watchful eye on Annie. When she began acting up, he was the one who steered her away from trouble and toward law enforcement. Still, he has his own problems coming to terms with the past.

An unemployed miner, Eddie Roe (Leech), has a complicated relationship with Annie. They also share a pre-teen daughter, Daisy (Ferguson). Because of their possessive natures, Eddie and Annie’s present isn’t much easier. While her recklessness bothers him, Eddie has made plenty of bad choices of his own.

An old soul, 12 year-old Daisy has already grown up too quickly, thanks in part to her mother’s job, but also due to the chaotic life she leads. Perhaps in reaction to her mother, Daisy tends to be neat and keeps things in good order. While she loves her parents, she recognizes their shortcomings. Still, they’re family.

Detective Brady Holt (MacLellan), who works with Annie, is rather mercurial. Just when it seems time to dismiss him as a partying, womanizing slacker, he’ll turn on a dime. A life-long resident of Bellevue and a flawed yet believing Catholic, Brady is harder to write off than it first appears.

After growing up on a nearby reserve, Virginia Panamick (Taylor) took off for a taste of city living. Upon her recent return to the area, this bright perfectionist joined Bellevue police force. Since she has an exacting nature, she finds herself bristling at Annie’s more intuitive, helter-skelter approach to the job.

Rounding out the town’s inner circle are the local Catholic priest, Father Jameson (Cobden); hockey coach Tom Edmonds (Leclerc); and the Mayor of Bellevue, whom everyone calls “Mother” (Thériault). Since the mine’s closing devastated the local economy, Mayor Mansfield is trying to revitalize it by attracting a micro-brewery to build a plant, in hopes of restoring the town to its former glory.

Although there is kindness to his heart, Father Jameson can tend to be rigid, when it comes to his view of the world. Meanwhile Coach Edmonds, who cares deeply for his players, can get pretty intense on the job, even though he still identifies as a kid in some ways, himself.

Just as Annie is able to separate the new case from her own family’s history, someone starts sending her riddles, and that someone is connected to her past. Will the “Riddler” manage to get inside her head, while Annie works the case and attempts to manage the complex relationships in both her personal and professional lives? Stay tuned.

Series Finale:
Episode #8 — “You Don’t Understand Me at All”

Annie narrowly escapes death as the news of who is responsible for Jesse’s disappearance hits the town. However, it becomes clear quickly that the horrible ordeal is far from over for Annie. A discovery made in the woods has the cops operating with all hands on deck to apprehend a very dangerous and angry suspect. As Annie and Peter work together to find the suspect – all things come to a head, answers are found, secrets revealed and long dead truths are unearthed. All this brings Annie into an epic climax with her Riddler. Lives hang in the balance and irreversible decisions are made. (Courtesy of CBC)

What do you think? Do you like the Bellevue TV series? Should this TV show have been cancelled or renewed for another season on WGN America and CBC?

Please bring back Bellevue. The show had an amazing star in Anna Paquin portraying a interesting, strong character. I miss being able to find each week to see what would happen.

Please renew this show. I am a thriller author and find too few well-written, acted and directed shows on television, especially network TV.

The series should be brought back. Allen Leech and Anna Paquin were terrific. Both are outstanding top quality actors that the show was most fortunate to score. Leech is one of the most handsome actors around, right up there with Henry Cavill.
When you think of stupidity in cancelling shows, think about Star Trek. It followers were incredulous, and drove the Stark Trek movement for the next 50 years. Proved producers make stupid choices all the theme, including prematurely ending Downton Abbey were there was still a ferocious appetite by the viewers.