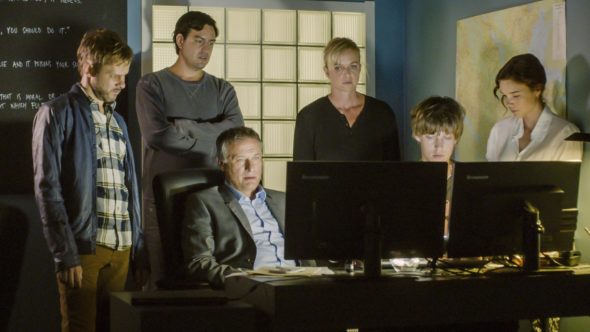 TV show description:
From Ken Bruen and Bobby Moresco, the 100 Code TV show is a Swedish crime thriller, which originally aired in 2015 on Germany’s Sky Krimi. The story unfolds in Stockholm, as the authorities investigate the connection between area killings and murders in New York City. Over the past year, a series of young, blue-eyed, blonde women have been found dead in fields of flowers.

NYPD Detective Tommy Conley (Monaghan) is on loan to the Stockholm police, where he is assigned to work with local investigator Mikael Eklund (Nyqvist). Since each man is battling demons of his own, the two take a distinct dislike to one another. Still, they must put aside their feelings and work together, since the killer is still on the loose and shows no signs of stopping.

Conley will not sleep until he’s found the murderer and saves any potential victims from the same gruesome fate. His unique approach doesn’t sit well with his new partner, who works by-the-book and isn’t fond of Americans.

Still grieving the death of his wife, Eklund was counting down the days to retirement, when this case landed on his desk. Now he has to juggle a high-profile investigation with his rather fraught personal life, which centers on raising his 17-year-old daughter, Hanna (Jankell).

It’s Mikael’s chief, Karin Hammar (Jonsson), who persuades him to take the case. She has some complicated feelings for him but knows he is the man for the job. Can she ensure their past won’t interfere with this investigation?

Working alongside Conley and Eklund are Jonsson (Bejarano), who could be mistaken for a walking encyclopedia. He harbors deep feelings for Ebba (Hall), who has quite a tough shell and seems not to reciprocate. Rounding out the team are Phille (Berglund), an IT specialist, and Josephine (Stiernstedt), an intelligence analyst.

Meanwhile, Hanna is struggling with difficult memories of her mother. To make matters worse, Mikael’s relationship with the girl is tense, at best. Despite her inexperience, now that her father is a single parent, she is frequently left alone. When an older man offers her the love and attention she longs for, she takes comfort in it, to her own peril.

What do you think? Do you like the 100 Code TV series? If it were up to you, would WGN America renew this TV show for season two?

Liked season 1, but left a little in the dark at the final episode. Found that season 2 premiered 1/6/2016, on HBO Nordic. Would like to see WGN America pick it up and also rerun season 1.

I loved this series! I only wish that Michael Nyqvist was still with us! What a great actor. This show was one you couldn’t stop watching! Dominic Monaghan is also excellent! I hated for it to end. Please continue this great series!

This was one of the best shows on TV. Had me hooked from the beginning. It should continue!

I really was intrigued by this series. The acting was top notch and the storyline constantly twisted and turned enough to keep my attention. I would love this series to have a second season!

I would love to see 100 code. The full season. I was only able to watch a few episodes and absolutely loved it.

Sandra Craig
Don’t cancel the show, this was gripping from the off and there’s nothing worse than leaving it unfinished

I love this program, please !

Please continue this series, it was great watching different cultures work with each other on a common goal, the actors were brilliantly real, and you could go forward with many episodes in many seasons, the sky is your only limit, and your imagination knows no bounds, dont let a breat show like this just die out so suddenly….

I love the show don’t cancel

I loved the series. The writers should bring the story back to New York to finish the story as it started in the pilot (Hundred Code)

I also think the show should go back to NYC because it was obvious that the master mind was in New York. the series was left open ended. Loved seeing Sweden and loved the different languages. it’s a shame to cancel this show….