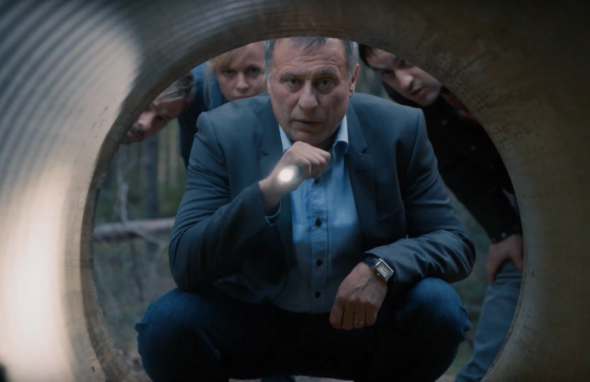 “You can save them.” WGN America has just unveiled a new trailer and the premiere date for their new TV show 100 Code.

A Swedish/German co-production, the crime thriller follows “the hunt for a serial killer who targets young, blonde and blue-eyed women, found dead in fields of flowers.” The cast includes Dominic Monaghan and Michael Nyqvist.

“100 Code” is an exceptional television show that underscores our commitment to high quality original series,” said Gavin Harvey, President, WGN America. “We are very excited to add this highly anticipated international thriller to our industry-leading lineup of scripted crime dramas.”

“100 Code” is a tense crime thriller, following the hunt for a serial killer who targets young, blonde and blue-eyed women, found dead in fields of flowers. Through a special arrangement with the NYPD, Detective Tommy Conley (Monaghan) is permitted to observe and advise the Stockholm PD, as he suspects a connection between a series of murders in New York and a death in Sweden. Upon arrival in Stockholm, he is paired with Mikael Eklund (Nyqvist), a Swedish cop with an aversion to American culture. Both detectives despise each other, but the two are quickly forced to resolve their differences as the mysterious killings continue. With the vicious killer still at large, Conley and Eklund embark on a hunt that leads the duo down a path of no return.

The series is produced by 100 Code AB & Zen Productions in association with Fabrik Entertainment, Red Arrow Studios International and Strix Drama for Kanal 5 and Sky Deutschland. “100 Code” is distributed worldwide by Red Arrow Studios International and has sold to more than 100 territories including the UK (Sky Atlantic), Italy (Mediaset) and Scandinavia (HBO Nordics).”

What do you think? Are you a fan of crime dramas? Will you watch 100 Code?

Honey, the star of the series DIED. The great Michael Nyquvist is impossible to replace.
I intend to look for his book about finding his biological parents years ago.
Sadly for me, I have no dvr and fell asleep just as the 2 hour finale started. I haven’t found a rerun scheduled for it, as it used to on Saturday nights.

I LOVE this show! Recently found it and got caught up “on demand” for the pilot & episode 2 now I dvr it each week.

I saw this in Sweden and it’s AWESOME. Hope they can continue the story into a season/series 2. Makes me miss Nyqvist even more knowing this will be on air soon in the USA.

Man this looks great but so sorry to see that Michael Nyqvist passed away. He was so great in the “Girl with the Dragon Tattoo” the 3 movies from Sweden.