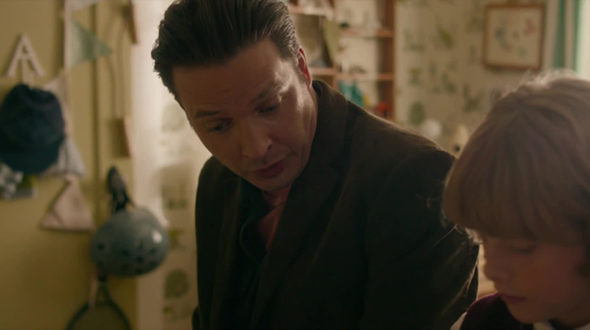 It seems The Disappearance TV series premiere has been cancelled by WGN America, at least for now. Back in May, the cable network announced the crime drama, which premiered on Canada’s CTV in October of 2017, would debut here in the States on July 12th. WGNA never announced a timeslot though, and when we checked its schedule, we found The Disappearance premiere has disappeared. The network’s show page currently states The Disappearance is coming in 2019, with a start date TBD.

A Canadian limited (or mini-) series, The Disappearance stars Peter Coyote, Camille Sullivan, Aden Young, Joanne Kelly, Michael Riendeau, and Micheline Lanctôt. The story follows a family as they hunt for the truth about what happened to their young son.

Here’s the official WGN America description of The Disappearance, from an earlier press release.

When Henry Sullivan (Peter Coyote) organizes a treasure hunt for his grandson Anthony’s (Michael Riendeau) tenth birthday, things take a turn for the worst when Anthony suddenly goes missing. “The Disappearance” follows Luke Sullivan (Aden Young) and Helen Murphy Sullivan (Camille Sullivan) as they delve into the all-consuming investigation of what happened to their son on that harrowing day. As the Sullivans and their extended kin grapple with the inexplicable mystery, deep familial secrets become uncovered and threaten to shatter the family unit.

What do you think? Are you looking forward to The Disappearance TV show? Are you disappointed it has been delayed by WGN until 2019? Let us know, below.

Renew; loved the story line and the actors

Please do nit cancel Disappearance. I am enjoying it. Thank you

Watched the first episode last night on WGN 7-9-19. We really enjoyed it and are already speculating the different scenarios! Thanks for good summer watching!

Looks like “The Disappearance” disappeared, at least from the article and the comments. But I did find and download all 6 episodes off of the New Episodes TV Website.

Yes, I’ve been looking forward to this show, have been going crazy trying to find it. At least now I know its not on, at least for now.

I have been waiting for a chance to see The Disappearance ever since finishing the incomparable Rectify, starring Aden Young. WGN America’s initial announcement was very exciting, but now I see a “Coming 2019” on the website. Come on, people!

It figures. Anything that has an interesting plot is always the first to go, but they’ll keep something that makes no sense running one season after another. But because 1 1/2 critics watched episode 12 of our favorite series and somehow could tell from that one obscure episode that the series had little merit… the series is promptly cancelled.

I would definitely watch, it sounds very interesting to me

Searched the guide and used voice activated remote to try and locate highly anticipated series The Disappearance but of course to no avail I finally resorted to Google search thanks for the bewildering information. As I searched the listings for the week I found at least 90% old reruns! Surely they could have aired this series anytime!

Yes, I am very disappointed that “The Disappearence “ was not on. Now I have to wait another year to view this series. Why they had to show *** twice last night is beyond me. The Disappearence could have been shown in the 9 o’clock time .

Disappointed that the show The Disappearance is delayed.

They always cut all the good shows off of wgn like underground thats why i dont even look at wgn any more they start a new series then they cut it off.

I am VERY disappointed and now another year, this isn’t what should have happened.