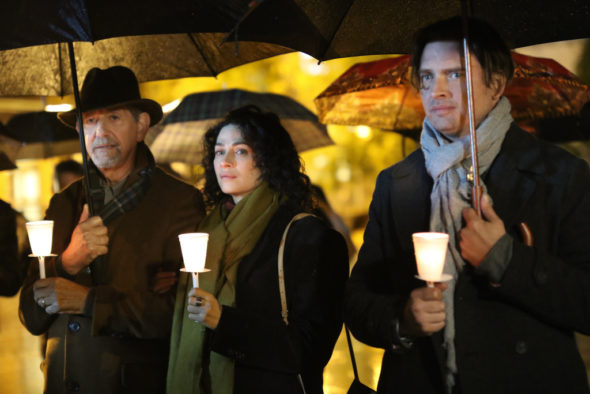 Can the Sullivan family stick together during the first season of the The Disappearance TV show on WGN America? As we know, the Nielsen ratings typically play a big role in determining whether a TV show like The Disappearance is cancelled or renewed for season two. Unfortunately, most of us do not live in Nielsen households. Because of that, many viewers are frustrated their viewing habits and opinions weren’t considered before the decision was made to end The Disappearance with one season. We care what you think, so we invite you to rate all of The Disappearance episodes for us here.

A WGN America mystery drama that debuted on Canada’s CTV, The Disappearance stars Peter Coyote, Camille Sullivan, Aden Young, Joanne Kelly, Micheline Lanctôt, Michael Riendeau, Kevin Parent, and Neil Napier. The series follows the investigation into the disappearance of Anthony Sullivan (Riendeau), who goes missing during a treasure hunt on his tenth birthday. The psychological drama digs into his family’s emotions as the facts of the case emerge. Although the police are on the case, the family also conducts its own investigation, looking for any possible evidence, and no secret is safe.

What do you think? Which season one episodes of The Disappearance TV series do you rate as wonderful, terrible, or somewhere between? Should The Disappearance have been cancelled or renewed for a second season with a new case? Don’t forget to vote, and share your thoughts, below.

Seems really slow. Leave out the music, can’t hear the actors for the music

This show made me feel young again. It was so slow, it reversed time!

We really liked this program & hope it continues at the very least… with a real ending.