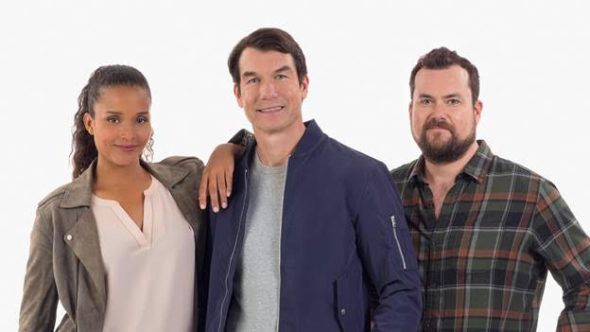 Carter is getting ready for its return to WGN America. Season two of the comedy will premiere in January. Jerry O’Connell, Sydney Poitier Heartsong, and Kristian Bruun star in the series.

The first season of Carter was popular with viewers. The series averaged a 9.39 with those that voted for the series’ episodes on this site.

WGN America revealed more about the return of the series in a press release. Check that out below.

Carter revolves around Harley Carter (O’Connell), the star of a hit detective TV show, who decides he needs a break from Hollywood. Carter returns to his sleepy hometown where he quickly discovers that his years of playing a fictional detective come in handy when he finds himself immersed in real-life mysteries. In season two, Carter plants roots as a celebrity Private Investigator and doubles down on his fame in a world where life continues to imitate TV. But Carter will discover that the toughest cases to solve are personal ones when he finds himself embroiled in a love triangle with his best friend – a real detective – and her new police chief, played by Lyriq Bent (She’s Gotta Have It), where the stakes are winner takes all.

“WGN America is excited to have Jerry and the cast back for a second season in January,” said Gavin Harvey, President of WGN America. “Because it appeals to so many different types of TV viewers, Carter became a fan favorite last year, and we can’t wait for everyone to enjoy this next round of crime and comedy.”

Carter returns with season two on January 20. Check out the trailer for the series below.

What do you think? Are you a fan of this WGN series? Will you watch season two?

Please bring Carter back. We binged the first season and can’t wait to watch more. Please continue this show.

Glad to see this show is returning, I really enjoyed Carter.

Jerry O’Connell makes this an fun and enjoyable show. I’m so happy it was renewed and can’t wait until January to start watching it

Glad it’s finally back. Very enjoyable show, and Jerry does a great job of playing a little off of reality, without it being annoying.