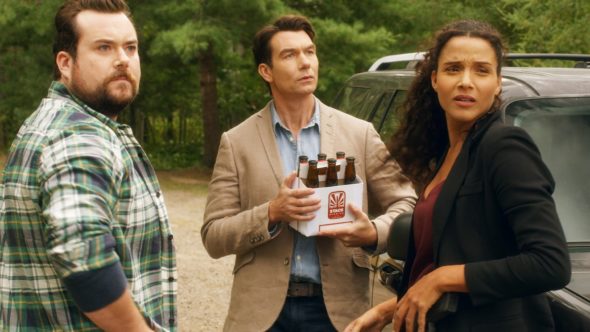 How does Harley Carter handle the culture shock of returning home, during the first season of the Carter TV show on WGN America? As we all know, the Nielsen ratings typically play a big role in determining whether a TV show like Carter is cancelled or renewed for season two. However, since this TV series originated in Canada, its Canadian ratings matter more. Because many viewers feel frustration when their viewing habits and opinions aren’t considered, we’d like to offer you the chance to rate all of the season one episodes of Carter below.

What do you think? Which season one episodes of the Carter TV series do you rate as wonderful, terrible, or somewhere between? Should WGN America cancel or renew Carter for a second season? Don’t forget to vote, and share your thoughts, below.

So happy to know Carter will be returning.

Please renew Carter, Jerry O’Connell is so good in this tv show. It’s fun and I look forward to watching it every week. Great cast, great sense of humor. Please, please renew, can’t wait for season 2.

I absolutely love this show. Jerry is such a fun actor – he just makes you feel like a good friend. The co-stars are new to me but I really like their down-to-earth way of acting. Please keep this show on the air!!!!

I love this show! The setting, the s.tory about childhood friends, and the humor without pushing an agenda reminds me of episodes of the great sitcoms of the 70s. Love it!

Carter is an excellent, entertaining show my family enjoys. The stories are well written and we have adopted Jerry and his two side-kicks. His two guardians are very cool. Please renew it. Tuesdays will be a total loss without Carter and his crew.

Love Carter. Love a show with some humor

My wife and I absolutely Love the show!!
Great cast and so glad to see Jerry O’Connell back on the air! Please renew this show, we need this one and more like it!!
Thanks

A Canadian take on Castle perhaps, but still a Canadian show and I think season 1 was great. Light, comedy, perfect for evening entertainment you don’t need to think a lot about.

Cancel this show. Carter is a ripoff of Castle. Rich guy want-to-be cop meets good looking lady cop. Gets Mayor to help him become a special consultant to the police force over the objections of the Chief of police.