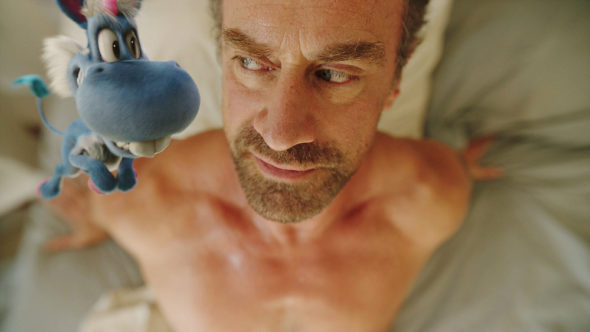 What’s next for Sax and Happy? Has the Happy! TV show been cancelled or renewed for a third season on Syfy? The television vulture is watching all the latest cancellation and renewal news, so this page is the place to track the status of Happy! season three. Bookmark it, or subscribe for the latest updates. Remember, the television vulture is watching your shows. Are you?

A comedic, fantastical Syfy crime drama, Happy! stars Christopher Meloni with Patton Oswalt (voice), Lili Mirojnick, Medina Senghore, Ritchie Coster, Patrick Fischler, and Christopher Fitzgerald. The season two cast also includes Ann-Margaret and Big Show. Happy! centers on a former cop, Nick Sax (Meloni). As a hitman on the skids, a drunken and depressed Nick had his existence turned upside down by Happy (Oswalt), an imaginary unicorn, who is out to save the day. In the second season, Sax is trying to stay sober and do right by his family, but old nemesis Sonny Shine (Fitzgerald) is now on a mission to Make Easter Great Again (MEGA) with the help of his demented Easter Bunny henchman.

The second season of Happy! averaged a 0.09 rating in the 18-49 demographic and 286,000 viewers. Compared to season one, that’s down by 56% in the demo and down by 57% in viewership. Find out how Happy! stacks up against the other Syfy TV shows.

Will Happy! be cancelled or renewed for season three on Syfy? The ratings are way down and there was a nearly 14 month gap between the end of season one and the start of season two. I’m thinking the show will be cancelled. For now, I’ll keep an eye on the Nielsens and update this page with breaking developments. Subscribe for free alerts on any Happy! cancellation or renewal news.

6/5/19 update: Syfy has cancelled the Happy! TV show so there won’t be a third season, at least on this cable channel.

What do you think? Were you hoping that the Happy! TV show would be renewed for a third season? Are you sorry that Syfy cancelled this TV series, instead?

Everytime I look for another season and have a great show you want to cancel it that’s like a famous book or author dying but you put author to death I don’t want to wait another year for you to make up your mind cuz it takes that long to make a season this is the dumbest move that Netflix could do.

This was a great show, we are super disappointed!! They never renew the good stuff, yet the kardashians have bewn for ever.

Oh that sucks. This show was pure gold. Do a season 3 finish the story

Loved it, would really be a good idea (looks at Netflix and Amazon) if someone wanted a great show with depth and humor and picked it up.

Super upset this was cancelled… Just discovered this series…. Please bring it back!

I regret only just finding this show. It’s pretty great.

Why HAPPY! Is Cancel that is my favorite show just stop cancel good show for people that love that show all the good tv show it always cancel stop that bring back I am tired of this **** bring HAPPY back atleast let them finish season 3 and 4…. And if somebody don’t like watching happy go watch Disney plus or the news or change the channel from your tv or put it on another channel sooo can see season 3 & 4 or put on Netflix season 3 & 4

I am absolutely blown away that this show was cancelled. My wife and I couldn’t get enough. So over the top but such great characters and writing. Never a dull moment with this show. It NEEDS to be picked up again.

Seriously this show was awesome and NEEDS to be renewed. this is the worst freaking news (Swearing in reality) that I have had in watching this show. the people who cancelled this show needs a ******* life. People can’t take harsh dark shows like this? give me a God damn break seriously continue the show and try again. great acting I cannot get enough. I think your ass holes for canceling the show.