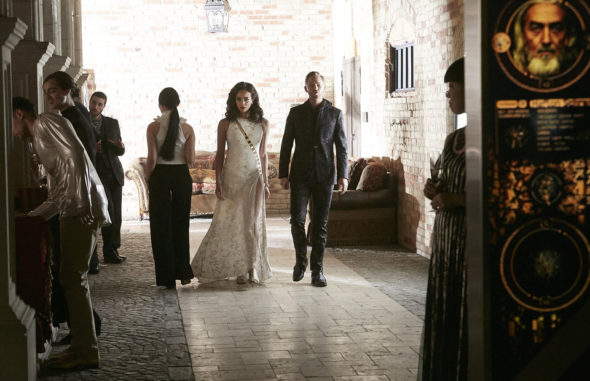 Has the team stopped The Lady? Is the Killjoys TV show cancelled or renewed for a fifth season on Syfy? The television vulture is watching all the latest cancellation and renewal news, so this page is the place to track the status of Killjoys, season five. Bookmark it, or subscribe for the latest updates. Remember, the television vulture is watching your shows. Are you?

A Syfy science fiction drama, Killjoys stars Aaron Ashmore, Luke Macfarlane, and Hannah John-Kamen. Dutch (John-Kamen), Johnny (Ashmore), and D’avin (Macfarland) are fun-loving, hard living interplanetary bounty hunters. They are sworn to remain impartial as they chase deadly warrants across the Quad — a distant system on the brink of a bloody, multi-planetary class war. The last installment ended with the team separated. As season four kicks off, they know name of their enemy: The Lady, which Syfy describes as an “immeasurable manifestation of evil without beginning or end,” and she’s after the Hullen heir.

The fourth season of Killjoys averaged a 0.08 rating in the 18-49 demographic and 420,000 viewers. Compared to season three, that’s down by 52% and 33%, respectively. Find out how Killjoys stacks up against the other Syfy TV shows.

Since the 2017 renewal was for a fifth and final season, we don’t have to spend this installment wondering whether Syfy will cancel or renew Killjoys for season five. Because even renewals can be cancelled, I’m still keeping an eye on the Nielsens and will update this page with breaking developments. Subscribe for free Killjoys cancellation and renewal alerts.

What do you think? Are you happy the Killjoys TV show was renewed for a fifth and final season? Is season five the right time to end the series, or do you wish Syfy would renew it through season six?

I really love this show and am upset that it is ending there could be so much more for these characters.

They should renew it again