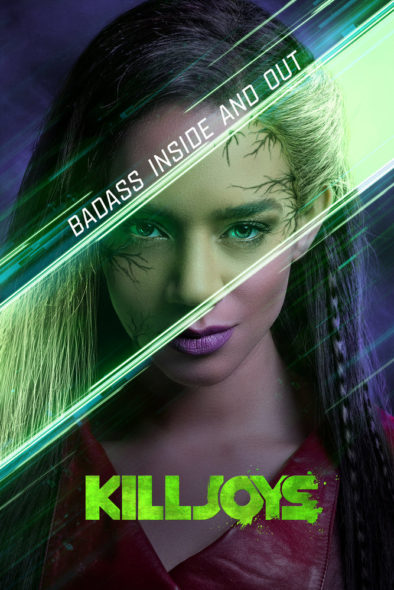 Is the trio still fighting the good fight during the fifth and final season of the Killjoys TV show on Syfy? As we all know, the Nielsen ratings typically play a big role in determining whether a TV show like Killjoys is cancelled or renewed for season six. Unfortunately, most of us do not live in Nielsen households. Because many viewers feel frustration when their viewing habits and opinions weren’t considered when they decided to end Killjoys with a fifth and final season, we invite you to rate all of the Killjoys season five episodes for us here.

A Syfy science fiction drama, Killjoys stars Aaron Ashmore, Luke Macfarlane, and Hannah John-Kamen. Dutch (John-Kamen), Johnny (Ashmore), and D’avin (Macfarland) are fun-loving, hard living interplanetary bounty hunters. They are sworn to remain impartial as they chase deadly warrants across the Quad — a distant system on the brink of a bloody, multi-planetary class war. As season five kicks off, Dutch realizes The Lady has put Westerley under a collective delusion. Now they must try to awaken from the memory matrix.

What do you think? Which season five episodes of the Killjoys TV series do you rate as wonderful, terrible, or somewhere between? Is this Syfy TV show ending at the right time, or do you wish it would be renewed for a sixth season? Don’t forget to vote, and share your thoughts, below.

Killjoys should definitely film a Season 6. Hell, he can afford to fly to outer space, he certainly can afford to run 10 episodes of a TV show.

Make Killjoys season 6.!!!!! Just when it gets good, they cancel. Boo. Boo. Bring back Killjoys

Bring back Killjoys so much story to tell!

It is sad that SyFy always seems to cancel really good series. Farscape was another but was picked up by another company and had enormous praise for it. Maybe another company will come along and do the same. I myself said I would not watch another show or give SyFy a chance since the loss of Farscape. I give them another chance and i fall back again into the sadness that they did it again.
So, I will never again watch anything from SyFy for a story gets going good and they garrote the show.
Shame on you SYFY……

Yeah it should have another season! The best syfi out there. I can’t believe you would cancel it!

I have really enjoyed the Killjoy’s TV series. I would enjoy seeing even more of what happens to the characters in a 6th season.

Just another series I got into thinking finally a show I could watch for years to come…you made me love Killjoys…now you’re taking it away…I might as well stop watching new series because I’m always sad, disappointed and angry when it to gets cancelled!