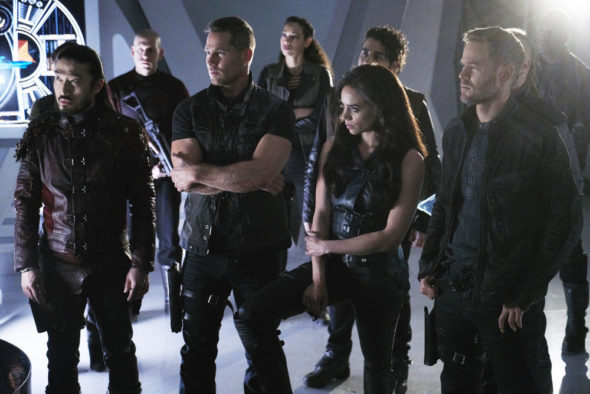 Will the Team return to fight another day? Is the Killjoys TV show cancelled or renewed for a sixth season on Syfy? The television vulture is watching all the latest cancellation and renewal news, so this page is the place to track the status of Killjoys, season six. Bookmark it, or subscribe for the latest updates. Remember, the television vulture is watching your shows. Are you?

A Syfy science fiction drama, Killjoys stars Aaron Ashmore, Luke Macfarlane, and Hannah John-Kamen. Dutch (John-Kamen), Johnny (Ashmore), and D’avin (Macfarland) are fun-loving, hard living interplanetary bounty hunters. They are sworn to remain impartial as they chase deadly warrants across the Quad — a distant system on the brink of a bloody, multi-planetary class war. As season five kicks off, Dutch realizes The Lady has put Westerley under a collective delusion. Now they must try to awaken from the memory matrix.

The fifth season of Killjoys averaged a 0.06 rating in the 18-49 demographic and 316,000 viewers. Compared to season four, that’s down by 28% in the demo and down by 26% in viewership. Find out how Killjoys stacks up against the other Syfy TV shows.

Since the 2017 renewal was for a fifth and final season, we don’t have to spend this installment wondering whether Syfy will cancel or renew Killjoys for season six. Still, could this series be revived in some form? I’ll update this page with any developments Subscribe for free Killjoys TV series news alerts.

What do you think? Is the Killjoys TV show ending at the right time? If it were your choice, would Killjoys be renewed for a sixth season?

With all of the cancellations on Syfy in recent years, I never expected Killjoys to get a 2nd season, not because it wasn’t a great show, because IT IS GREAT! but because Syfy has had so many single season cancellations, I was stunned to see this back for a 2nd, then 3rd, and actually awestruck it lasted for 5 seasons. I wish it would go on for 13 Seasons like Supernatural on the CW, but I guess if these 5 are all we get then that’s the breaks. IF you can get the blu ray and support good sci-fi productions,… Read more »

I definitely think this show should still go on im shure they could come up with new twists, love the actors and adictive show..

RENEW!! Love the comedy and chemistry between actors. However, the writing for the final season definitely felt like a final season – and now that I see they were aware it was the final season, I know why. It was one big, long drawn out salute to everything we love about the show. Which was great but sad too.

Renew. This is one of the few shows that I look forward to watching.

please dont cancel this wonderful show,there are not enough good ones

Please do not cancel this show. There are too few decent sci-fi shows out there and so many more stories to be told in this series.

Wife & I have watched Killjoys every season from the beginning. I is one of the best shows on Syfy channel. The way season 5 ended it lead one to believe there is more to come. I have to say season 5 was the best season to date. I would be a shame to see it canceled with the ending leaving us wanting to see what is going to happen next to the new level 6 group. Don’t leave everyone hanging Syfy. Please don’t cancel Killjoys. I’m 65 yrs old and loving Friday nigh Killjoys.

I hope they don’t cancel, I recently started watching this, I binged it and enjoyed it!

Awesome show, it would be a shame to see it go