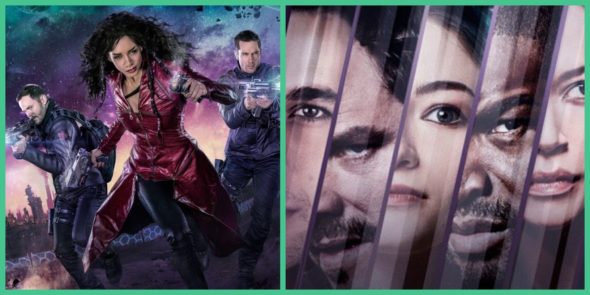 As Syfy viewers may know, the cable channel is currently airing a pair of science fiction dramas on Friday nights — Killjoys and Dark Matter. Should one or both of them return for another season?

Killjoys follows a fun-loving, hard living trio of interplanetary bounty hunters who are sworn to remain impartial as they chase deadly warrants throughout the Quad — a distant system on the brink of a bloody, multi-planetary class war. The series stars Aaron Ashmore, Luke Macfarlane, and Hannah John-Kamen.

On Dark Matter, the crew of a derelict spaceship is awakened from stasis with no memories of who they are or how they got on board. Facing threats at every turn, they have to work together to survive a voyage charged with vengeance, betrayal and hidden secrets. The show’s cast includes Marc Bendavid, Melissa O’Neil, Anthony Lemke, Alex Mallari Jr, Jodelle Ferland, Roger Cross, Zoie Palmer, Melanie Liburd, and Shaun Sipos.

Both of these shows are in their second seasons, neither is doing very well in the ratings, and neither has been renewed for a third season yet. Their numbers are about the same and it’s unclear if either will be back at this point.

What do you think? Do you like Killjoys or Dark Matter? Which is better? Should either one be renewed for a third season?

9/1 update: Both Killjoys and Dark Matter have been renewed for third seasons.

Killjoys has been RENEWED for 2 more seasons and then it will end. Dark Matter has been CANCELLED!

With these ratings, not really. I don’t consider these ratings acceptable. However, they already renewed Wynonna Earp, and both shows have better ratings than Wynonna, so how do you say no?

Yes both are great shows.

Dark Matters great characters. I love the show. Saw it on Netflix; bet it does well.

Our family enjoys sitting down to watch Kill Joys and Dark Matter. Please don’t take them off the air! Both shows are family friendly and they get our teens to sit and spend time with us on a Friday evening.

I’m not even sure which one I prefer, as I love them both. I hope they will be renewed.

Good news about renewal! There are very few shows today that bring what Killjoys bring, and it would have been a damned shame if that one was cancelled. Dark Matter is alright too, I guess.

During this time of year, these are the only two shows that I make sure not to miss on a weekly basis.

Dark Matter for sure. I like both and would be disappointed if both weren’t renewed.

Dark Matter was just CANCELLED! Killjoys will be back for 2 more seasons and it will end.

I like both of the shows. The story lines are different from other shows like them. They keep you thinking and quessing what is next. If the syfy channel cancels these shows then they will lose me and others around me as viewers again. Why cancel good shows again? I would ask that Killjoys and Darkmatter be renewed for many seasons. Thanks for reading.

How about because they have ratings that were UNACCEPTABLE FOR DECADES, ratings that would have cancelled both shows after their first seasons? Ratings don’t matter to you, obviously. Fortunately for you, they don’t matter to NBC Universal(who owns SYFY) most of the time either. Good thing for you.