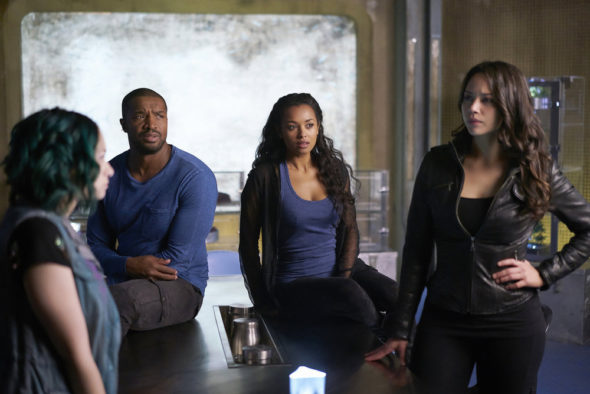 Dark Matter may not being coming back to television, but is there still a future for the story? Recently,  co-creator Joseph Mallozzi discussed his plans for the future of the cancelled Syfy TV show.

On his blog, Mallozzi revealed he plans on completing the Dark Matter story as a comic book:

All good things must come to an end – some much sooner than expected.  Sadly, such is the case for Dark Matter. Despite word of the cancellation by syfy, fandom rose up and gave us new hope. We sought to buck the odds and find our little show a new home.  But unfortunately, I just learned that our final option has proven unworkable due to contractual issues.  It’s a shame because these potential saviors reached out to me and offered a creative solution that, had it worked, would have been a sci-fi fan’s dream scenario.  But, alas, it was not to be.  In time, I would love to tell you all about it.

As for what’s next for Dark Matter?  My first choice would be to complete the story in comic book format where it originally began, but I’ve just started to look into the possibility now.  Beyond that, I’m not sure.

Thank you to my cast and crew who made it all possible.

And an especially HUGE THANK YOU to all of you, the viewers and fans, who made Dark Matter one of syfy’s most watched shows and who rallied and made your voices heard these past few weeks.

I said it before and I’ll say it again…

What do you think? Are you a fan of Dark Matter? Would you read the show as a comic book?

Still PISSED! I seldom even check SyFy out anymore, and will definitely NEVER start watching a current series there. If I should hear they have a good one, I’ll wait until it ends and see if they cancel it mid-story before watching it in reruns. I’m doing more Audible now – publishers don’t end books mid-story.