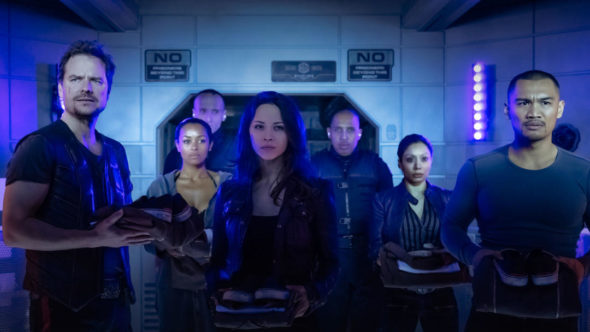 The sci-fi drama follows the crew of a derelict spaceship who awake with no memory of who they are or how they got on board. Still, they must work together to survive a threatening voyage charged with vengeance, betrayal, and plenty of secrets. The cast includes Marc Bendavid, Melissa O’Neil, Anthony Lemke, Alex Mallari Jr, Jodelle Ferland, Roger Cross, and Zoie Palmer.

Recently, Mallozzi addressed Dark Matter‘s cancellation on Reddit, saying Syfy‘s LA division did not support the series from the beginning. Read the entire post below:

It irritates me too. Especially because I had a five season plan going in complete with character and story arcs (which is why we were always able to set-up and pay off so much as the show went along). But, since you asked, this is what went down…

When we were first pitching the show, the pilot script went to Syfy’s Acquisition division in New York. They picked up the show. But as it turns out, the script had also been sent to Syfy’s Originals division in L.A. – who hated it and passed. And when they found out that the Acquisitions department in NY had picked up a project they had passed on, I heard they were decidedly Unhappy.

Then the show premiered and outperformed most of their originals. Which, from what I heard, really didn’t sit well with Syfy L.A.

Fast-forward three years later and our point person in New York left to go to Netflix. As a result, we didn’t have a champion in our corner anymore. Even though we were the network’s third-most watched show, I heard that not one executive stepped up for us. And, well, Syfy L.A. were never really fans – so we were cancelled. Without so much as a press release or a thank you. We went back at them and asked for the opportunity to offer fans a conclusion, even simply in the form of a two hour movie. They never even answered the email.”

What do you think? Are you a fan of Dark Matter? Would you have watched a fourth season?

I am old but got hooked on the series after watching season one with my son. I was terribly disappointed at the abrupt, unsatisfying ending that left me feeling very cheated. I certainly would have watched a fourth season or at least a decent ending to the story. Why are producers so uncaring about how they treat their fans? It is not right. They need to be sued, if that is possible.

Of course I would love to carry on watching 2 more seasons or a special 2hr concluding movie. Loved it!
Can Neflix not do it as an original?

I had already quit watching syfy because of this kind of B.S. and not giving a sh*t what the viewers want. I started watching because it was on Netflix and LOVED it! Got to the end of season three with all the tempting little teasers of what was to come, and…lo and behold…no more. Then I found out it was picked up by the syfy channel and it just reaffirmed my belief that I will never turn that channel on again. I sure hope another network sees the potential for finishing. If not…to ALL the actors I loved your work.… Read more »

The last straw. Sci Fi (or SyFy, stupid) cancelled every show I liked. So I stopped watching. Do they have anything good yet?

Dark Matter was a tremendous hit, and to cancel it without concluding the storyline was unfair to its fans. I am upset because it was my favorite Syfy show! I wish another network would have picked up the series!

The show was a tremendous hit, and to cancel it without concluding the storyline was unfair to its fans. I am upset because it was my favorite Syfy show! I wish another network would have picked up the series!

Just binge watched all of Dark Matter to then find out it had been cancelled, absolutely gutted. Would love to know what could be in store for the crew next. Please, please bring it back

I’m honestly sad that Dark Matter was canceled. I thought it was one of the best sci-fi shows ever. It would have been nice if they could have even had a conclusion. Scifi channel big mistake.

Thought it was a really good series liked it a lot was very disappointed that after 3 seasons of growing with these characters it was just abruptly ended without any conclusion to their fate or what destiny awaits them.

Really enjoyed the show and the cast. Was very disappointed it was not renewed.

I would definitely like to see that two hour movie of the conclusion. This was a great series. I’m an old retired SciFi nerd who has watched a lot of stuff on many platforms and there isn’t much out there that grabs my attention anymore but Dark Matter was better than 90% of the stuff nowadays.

We just finished watching this show on Netflix, and OH MY what a cliffhanger!! We would definitely keep watching it!! Please bring it back!!

It is really disappointing that a good popular show should be cancelled just because of a persons pride. Accept that you may have got it wrong and finish the story… please don’t be mean…

loved it one of my favourites of all time, bring it back!!!!!