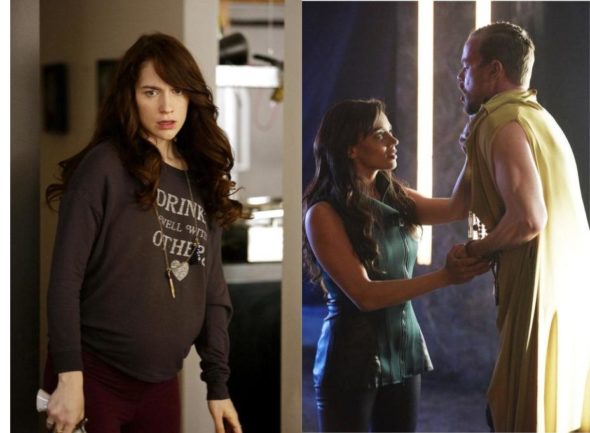 No longer does summertime mean re-runs, all of the time. Today, Syfy officially announced the release dates for Wynonna Earp season three and Killjoys season four. The cable network also confirmed the previously announced fourth and final season of its 12 Monkeys TV show premieres on Friday, June 15, 2018 at 8:00pm ET/PT.

NEW YORK, NY – May 10, 2018 – SYFY announced their upcoming summer schedule today, which includes the return of 12 MONKEYS (June 15) along withWYNONNA EARP and KILLJOYS (July 20) airing back to back on Friday nights. Additionally, SHARKNADO WEEK returns to SYFY with an all new shark filled movie event beginning Sunday, August 12 and leading into ultimate shark showdown in the finale of SYFY’s hit franchise, SHARKNADO, airing onSunday, August 19 at 8/7c.

In Season 4, James Cole (Aaron Stanford) and Dr. Cassandra Railly (Amanda Schull) set out on an epic quest, traveling further back in time than they have ever been before. According to legend, their only hope lies with a weapon capable of stopping the Witness for good. But they’ll soon discover that in order to win the final battle and save time itself, they will have to make the ultimate sacrifice.

Based on the IDW Publishing comic book created by Beau Smith, WYNONNA EARP follows the life of famous lawman Wyatt Earp’s demon-fighting great-great-granddaughter Wynonna (Melanie Scrofano), who inherited Wyatt’s mythic abilities and his famous gun in order to put an end to the Earp curse once and for all. In Season 3, reckless and reluctant warrior hero Wynonna and her team of outmatched outsiders return to face monsters, revenants and their biggest fears as they fight to take down the demon who cursed the Earp family before he destroys the Ghost River Triangle – and the world.

The end of Season 3 left our Killjoys scattered to the far corners of The J galaxy and beyond. Dutch (Hannah John-Kamen) is on a journey to face her biggest foe yet, while D’av (Luke Macfarlane) and John (Aaron Ashmore) are trapped in an elevator in deep space with a pregnant Delle Seyah (Mayko Nguyen). They are united by the knowledge of the name of their true enemy: The Lady, an immeasurable manifestation of evil without beginning or end. The Lady is making her play, and our trio has something she wants.

What do you think? Do you watch the 12 Monkeys, Wynonna Earp, and/or Killjoys TV series? Do you plan to check out the new seasons this summer, on Syfy? Let us know, below.

Everyone is entitled to their own opinions but I happen to like KILLJOYS, WYNONNA EARP and 12 MONKEYS.

This is the last season of 12 Monkeys, and we know Killjoys will have one more season after this one. How long can they keep renewing the atrociously rated Wynonna Earp? Yes, this SYFY where FAILURE is ACCEPTABLE. We will see.