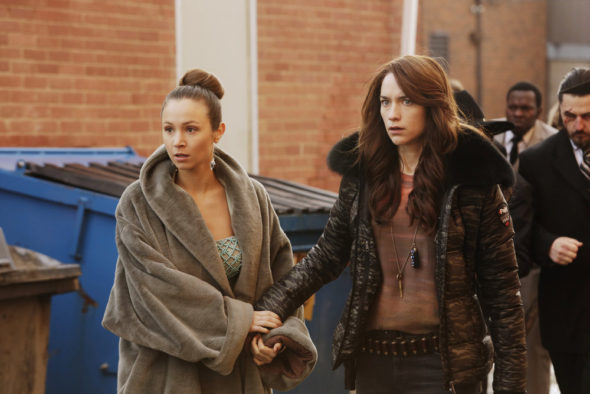 Wynonna Earp is back in action. Recently, it was announced production has begun on season three of the Syfy TV show.

The drama, which airs on Space in Canada, follows lawman Wyatt Earp’s demon-fighting great-great-granddaughter, who inherited his abilities, as well as his legendary gun. The cast includes Melanie Scrofano, Shamier Anderson, Tim Rozon, and Dominique Provost-Chalkley.

Season three of Wynonna Earp is slated to premiere on Space later this year. Syfy has not yet announced a premiere date.

“We’re excited to kick off production on the third installment of this inventive sci-fi series that continues to turn the western genre on its head,” said Corrie Coe, Senior Vice-President, Original Programming, Bell Media. “Time and again, Emily Andras and her characters, brilliant storylines, and plot twists take our viewers on a ride that has them tuning in for more every week, and we can’t wait to see where this season takes us.”

“Over the first two seasons, this series has connected with one of the most passionate audiences in the industry in a very special way,” said Jordy Randall, Executive Producer, SEVEN24 Films. “After the surprising events of last season, we can’t wait to deliver these new episodes to our growing fan base.”

Season 2 of WYNONNA EARP saw its total audience increase by 30% compared to Season 1, and had an increase of 46% in the key A18-49 demo. During its Fridays at 10 p.m. ET timeslot, Space was the most-watched entertainment specialty network among A18-49 viewers.

What do you think? Are you a fan of Wynonna Earp? Will you watch season three?

As long as I know when it is coming on I will watch it. I love the show Wynonna Earp! I only came across it on Netflix & became hooked. I typically don’t watch tv but watch the streaming things like Netflix cuz of my regularly changing schedule. Although for Wynonna I’m willing to make adjustments so I don’t miss it. However I NEED TO KNOW when it’s starting.

Wynonna Earp is a ground-breaking program with a production team ready to take chances and blaze a trail, and a cast willing to commit to the characters and the fans. WE gives voice to what we are feeling in times such as these.

I can’t wait to see if the ratings drop again in season three. They dropped in season 2. Maybe it will go below a 0.10 live average this time.

Dude I see you on every Wynonna Earp topic. We get it. You don’t like the show.