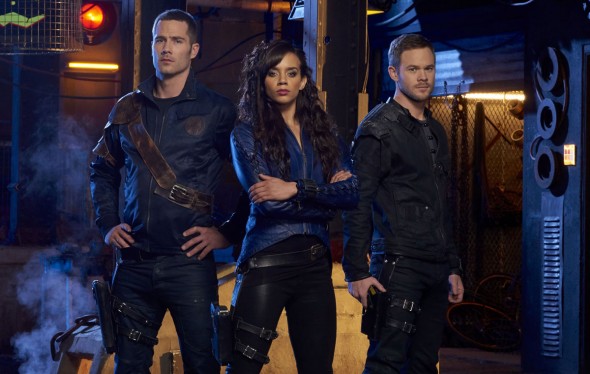 Syfy has announced that Killjoys has been renewed for a second season. The 10 new episodes will begin airing next year.

THE WARRANT IS ALL: KILLJOYS RENEWED FOR SECOND SEASON ON SYFY

— Produced by Temple Street Productions in Association with Space —

NEW YORK – September 1, 2015 – Syfy announced today that the acclaimed series Killjoys has been renewed for a second 10-episode season, scheduled to air in 2016. From Temple Street Productions (Orphan Black) and Michelle Lovretta, the creator of Lost Girl, Killjoys averaged 1.5 million viewers (L3) in its first season.

Produced in association with Space and distributed worldwide by Universal Cable Productions, Killjoys follows a trio of interplanetary bounty hunters who chase deadly Warrants (fugitives) throughout the Quad, a distant planetary system on the brink of a bloody class war. The series stars Hannah John-Kamen as Dutch, Luke Macfarlane as D’avin and Aaron Ashmore as John.

“We couldn’t be more excited to bring back Killjoys and its stellar cast to audiences across the U.S.,” said David Fortier and Ivan Schneeberg, co-Presidents of Temple Street Productions and Executive Producers of Killjoys. “We look forward to working with the team at Syfy for a thrilling second season.”

Killjoys is produced by Temple Street Productions in association with Space and Syfy. Creator and showrunner Lovretta serves as executive producer and writer. Executive producers are David Fortier, Ivan Schneeberg and Karen Troubetzkoy.

What do you think? Do you like the Killjoys TV show? Do you think that it should have been renewed or cancelled instead?

This show is very entertaining thanks for renewing it

Thank you for keeping this show it is a great show.

Awesome. My girlfriend watches all these shows with me so I’m glad they were kept. I read somewhere they were thinking of a crossover for Killjoys and Dark Matters. As for the short episode order, they may still not be 100% sure to invest in a longer season. But more can always be added between now and next summer (I figure it’s a summer season show). Now that 3 of my favorite shows are renewed how about Defiance’s renewal?

I am glad the Killjoys will have a season 2. I like this show alot. It is different from what I usually watch. I really like the main characters.

I really enjoy this show! Very happy this was renewed along with ‘Dark Matter’. I prefer ‘Killjoys’ but both are a lot of fun. More than 10 episodes would’ve been nice, but I’ll take what I can get…”:^>

So happy it has been renewed and we can see more stories unfold but also wish they had more then 10 episodes for Season 2.

So happy this has been renewed. Great show and having 3 hot actors on it doesn’t hurt either.

Ditto what Georgeanne said. I’m 66 years old, and sci-fi is my main go to. It just bothers me so much that if it doesn’t hit their idea of what the correct demographic should be, then the series is gone.
This happens to me more than I care to admit!

I like this show a lot. Very fast paced and edgy. And I am not in the networds target demographic as far as age. It makes me sick that the networks base their projections on such a small window of views as far as age is concerned. My kid are in the targeted age bracket and they don’t watch T.V. The networks need to wake up because more viewer are outside their targeted age bracket.

Yup, today’s “youths” a;; have their noses in their phones. They don’t have time for good programming. If you have any doubt just watch how fast the big 3 change up their programming (does anybody even watch ABC, NBC or CBS anymore) to try and attract audiences, what losers. Keep up the good work SyFy!!! SyFy Friday is must watch TV!!!!!!!

Demographics – I have come to believe it’s a better idea than it is in execution. It often doesn’t make sense. They want that almighty 20 something. Supposedly they spend the big dollars to support advertisers. Yet all the current information I’m seeing says that young adults are living with parents longer, many are under employed, but the big factor is education costs sky rocketing. Most are saddled with larger, longer loan payments, causing them to cut back expenditures and delay buying homes. Does that sound like a good demographic for advertisers. Then there’s anecdotal evidence …ever notice the drivers… Read more »

I’m not in the targeted network age demographic either being over 50, but I love Killjoys because I love a well acted, well produced with a good script Sci-fi program, or movie. I’ve loved science fiction my entire life. I grew up on the first run Star Trek series, then Battlestar Galactica in the 70s. I even watched the re-boot of BG in the early 2000s which was much better than the original. Yeah, I think networks should wake up and realize that the aging baby boomers were not raised as previous generations in America were. We think younger, and… Read more »