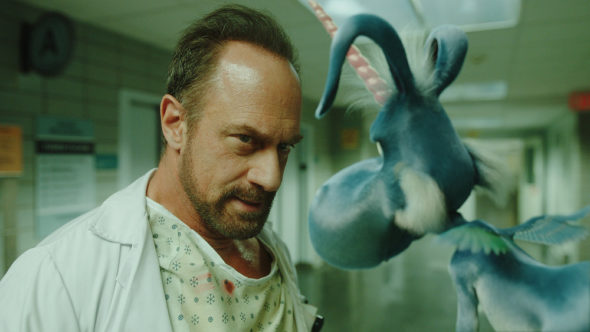 TV show description:
Based on the graphic novel of the same name from Grant Morrison and Darick Robertson, the Happy! TV show centers on a former cop, Nick Sax (Meloni). Now a hitman, Nick finds himself unmoored in a treacherous world full of murder and meaningless hook-ups. One day, though, his drunken, depressing existence is turned upside down by Happy (Oswalt), an imaginary unicorn.

As a big city police detective, Nick was something of a superstar. After losing everything, he finds himself pretty much on the skids. Now working as a killer for hire, Nick blows what little cash he earns on drugs and booze.

Little Happy is silly, screwy, and persistently positive, which makes him the polar opposite of the snarky, cynical Nick. Together, this unlikely duo is partner up. Can they save the day?

There’s nothing stalwart single mother Amanda Hanson (Senghore) won’t do for her daughter, Hailey (Lorenzo). When the girl is kidnapped, Amanda’s world crumbles. In her fight to bring home her child, this mom must confront her personal demons.

Although he operates a legitimate wine import business, the fiendish Francisco Scaramucci, a.k.a. Mr. Blue (Coster), is far too wealthy to have come by his affluence honestly. It is from his extra-legal initiatives that he really rakes it in. Smoothie (Fischler), is the stooge who serves as Mr. Blue’s interrogator, and his methods truly are madness

Finally, there’s Meredith McCarthy (Mirojnick). A tenacious homicide detective, Merry is used to fighting to make her mark in a man’s world. In order to safeguard her aging mother and hang onto her job, Merry has not been above compromising her values or her honor. As her past comes back to haunt her, will it prove her damnations or her salvation? Stay tuned.

What do you think? Do you like the Happy! TV series? Should this TV show have been cancelled or renewed for a third season on Syfy?

One of the funniest, fastest, most twisted shows I’ve seen in years. Shame it was canceled, particularly after the twist at the end (hellooooo Jeff Goldblum…). Even one more season could have tied up all the metaphysical loose ends in a truly creative and thought-provoking way.