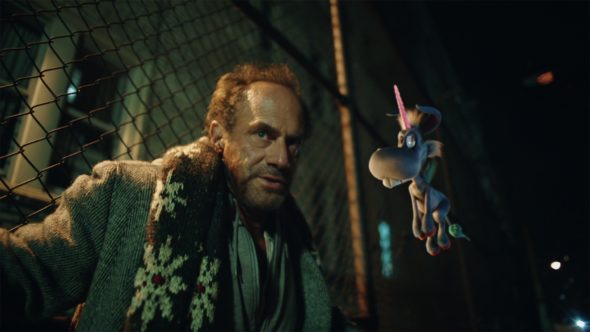 Nick isn’t smiling over this news. Syfy has cancelled the Happy! TV show so there won’t be a third season for this strange series. The program is based on a comic book series that was created by writer Grant Morrison and artist Darick Robertson.

A comedic, fantastical crime drama, Happy! stars Meloni with Patton Oswalt (voice), Lili Mirojnick, Medina Senghore, Ritchie Coster, Patrick Fischler, and Christopher Fitzgerald. The season two cast also includes Ann-Margaret and Big Show. Happy! centers on a former cop, Nick Sax (Meloni). As a hitman on the skids, a drunken and depressed Nick had his existence turned upside down by Happy (Oswalt), an imaginary unicorn, who is out to save the day. In the second season, Sax is trying to stay sober and do right by his family, but old nemesis Sonny Shine (Fitzgerald) is now on a mission to Make Easter Great Again (MEGA) with the help of his demented Easter Bunny henchman.

Given the decline in ratings and because there was a nearly 14-month gap between the end of season one and the start of season two, the cancellation doesn’t come as much of a surprise. However, Universal Content Productions plans to shop the series to other outlets and the first season is supposedly performing well on Netflix.

Syfy has also cancelled the Deadly Class TV show. The cable channel appears to be cleaning house as Nightflyers, Channel Zero, and Killjoys (final season starts July 19th) have all been cancelled.

What do you think? Do you like the Happy! TV show? Should this Syfy series have been cancelled or renewed for a third season? Would you watch the show elsewhere?

I liked meloni in this show not law and order. While happy was on the crated side, it was entertaining. I was waiting for season three. Ann margret was a pleasant surprise. Please bring this show back

Wow, a 14 month gap? That makes way more sense then. I saw both seasons on Netflix back to back and we need more seasons people! A gap like that can kill a show so that is a true shame. Producers have a chat with Netflix about continuing this story. We will be glued to our screens!

Very orginal and great show. If wnough people knew about it, it would do well.

Bring it back!! It will do well on Netflix!

Renew the show. It’s very entertaining and funny. I enjoy the show. Christopher Meloni is excellent on the show.

Crap…so totally UNHAPPY to hear this news. I actually almost cried to hear that HAPPY! is no more. My older kids and I LOVED this very wacky, weird, amazingly strange show! Feeling horribly sad for Mr. Meloni. He was unbelievably hilarious in this show and a welcome change from his normal, uptight and good cop role as Stabler in SVU. We would have continued to watch HAPPY! until the end. I would be willing to pay $ if they would bring it back on Netflix or Hulu or if they just put it out straight to dvd as a collection.… Read more »

Yes yes, bring Happy back
Please!! On my second / third run of season one and two, sooooo good.
I know season two went a little bizarre but still hilarious and brutally good, some get this

Happy! should do like what happened to The Orville, and go over to HULU as streaming content is the future of all media, regardless of content. This is why Elon Musk is launching hundreds of mini satellites in his Star-Link project. The writing is on the wall! Terrestrial broadcasting will soon be relegated to the dust bins of the media pile of forgotten technologies (remember floppy disks?) that litter the landscape of content providers.