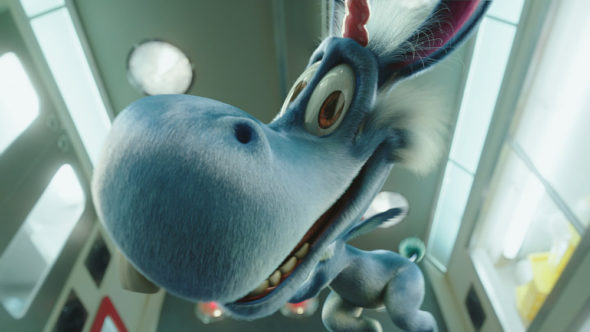 Will Syfy make fans happy or sad? Has the Happy! TV show been cancelled or renewed for a second season on Syfy? The television vulture is watching all the latest cancellation and renewal news, so this page is the place to track the status of Happy! season two. Bookmark it, or subscribe for the latest updates. Remember, the television vulture is watching your shows. Are you?

The first season of Happy! averaged a 0.21 rating in the 18-49 demographic and 658,000 viewers. Find out how Happy! stacks up against the other Syfy TV shows.

Although it premiered with great ratings for a Syfy TV series, the numbers have fallen quite a bit in subsequent weeks. Flying blind, while I’m not averse to a little horse unicorn flesh, or that of a well-marinated detective/hitman, I think Happy! will score a second season renewal. It has something of a built-in audience, thanks to the Grant Morrison and Darick Robertson graphic novel. That said, I reserve the right to change my mind, should it fail to draw a respectable audience. For now, I’ll keep an eye on the Nielsens and update this page with breaking developments. Subscribe for free alerts on any Happy! cancellation or renewal news.

What do you think? Did you hope the Happy! TV show would be renewed for a season two? How would you feel had Syfy cancelled this TV series, instead?

I really enjoyed the show. I am truly hoping it returns. Please bring the show back. Now that he has left the girl, he will now move on to ….

Well, it’s on SyFy, so if it’s a good series, it’ll be cancelled about 2 or 3 seasons in for no apparent reason. i’ve been burned so many times by SyFy, I’m not even going to bother with this show until it’s been cancelled.

i’m in love with the tv show happy. I first started watching it on xfinity and was quit sad when i seen only 6 episodes i watched all of them and thought there has to be another one but im not seeing it. but i give it a 10 rating the best. hoping they continue it.

I love Happy!! Need a little buger sugar?That still cracks me up. I got my hubby addicted to the show. So awesome there is a season 2. Love Melon. I use to watch SVU til he left. Happy is my new favorite grimy in your face show.

Happy! is a twistedly sick LMAO comedy that I absolutely loved. I cant wait to see Season 2. A comedy for AULTS ONLY that is guaranteed to make you laugh. HATS OFF to everyone involved in the making of this TV series . An absolute enjoyment for those of us with a little sick humor inside of ourselves. Excellent job to the whole inventive crew of Happy! I am over joyed to know the Seasons continue. I would be very disappointed if it was cancelled.

Please bring season 2 back this is the most awesome show that I have seen since The Magicians!

Happy is AWesome!! My whole family LOVES it!! BRING IT ON

Please dont cancel the show happy. We love the show.