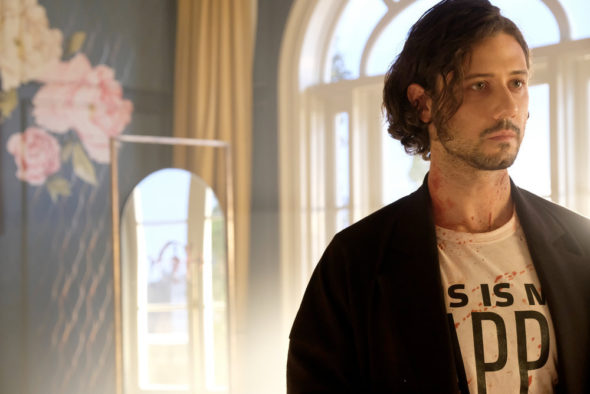 Does the magic endure? Is The Magicians TV show cancelled or renewed for a fifth season on Syfy? The television vulture is watching all the latest cancellation and renewal news, so this page is the place to track the status of The Magicians, season five. Bookmark it, or subscribe for the latest updates. Remember, the television vulture is watching your shows. Are you?

A supernatural Syfy drama, The Magicians stars Jason Ralph, Stella Maeve, Olivia Taylor Dudley, Hale Appleman, Arjun Gupta, Summer Bishil, Rick Worthy, Jade Tailor, Brittany Curran, and Trevor Einhorn. The series follows Quentin Coldwater (Ralph) and his friends as they hone their magical abilities and fight off evil threats. Last year ended with The Monster finding a mind-wiped Quentin. In season four, it will also seek out the others, and something else, as well.

The fourth season of The Magicians averaged a 0.19 rating in the 18-49 demographic and 541,000 viewers. Compared to season three, that’s down by 30% and 24%, respectively. Find out how The Magicians stacks up against the other Syfy TV shows.

Will Syfy cancel or renew The Magicians for season five? The cable channel announced that this series had been renewed just before the fourth season premiered. I’ll keep an eye on the Nielsens anyway but will turn my hungry attention elsewhere. Subscribe for free alerts on The Magicians cancellation or renewal news.

What do you think? Are you glad that The Magicians TV show has been renewed for season five? How would you feel if Syfy had cancelled this TV series, instead?

OMG does SYFY need it’s head examined…..SERIOUSLY they can NOT cancel the only TV show worth watching on SYFY the first season without Q and it’s going to hell! If it’s true and the SERIES FINALE IS APRIL 1st then April 2nd I am calling my Streaming provider to take the SYFY channel OFF MT STREAMING LIST! SYFY is acting like FOX cancelling super great shows prematurely! So disappointed SHAME, SHAME SYFY! Why not fight back?

Hell yes I am glad we got season 5! Love the story, love the characters, love the spin on realism! Keep it going! season 12!!!