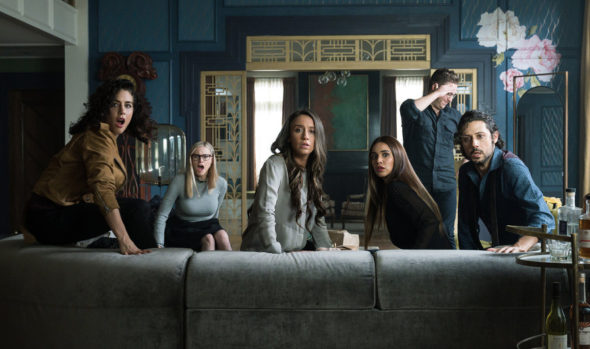 The chances of a sixth season renewal have disappeared for The Magicians. Syfy has revealed that the current fifth season will also be the show’s last.

The Magicians stars Stella Maeve, Olivia Taylor Dudley, Hale Appleman, Arjun Gupta, Summer Bishil, Rick Worthy, Jade Tailor, Brittany Curran, and Trevor Einhorn. The series follows a group of friends as they discover their magical abilities and ward off evil creatures who threaten to destroy the magical world they’ve come to know. In season four, magic was saved with Quentin Coldwater giving his life to save his friends and the world. In year five, there’s too much magic and, as the excess builds, an apocalypse looms.

Eight episodes of the current season’s 13 installments have aired thus far. The de facto series finale is expected to run on Wednesday, April 1st. While the season’s finale was not planned to end the show, word is that it was written so that it could also serve as The Magicians’ last episode.

“The Magicians has been a part of our Syfy family for five fantastic seasons,” Syfy said in a statement to Deadline. “As we near the end of this journey, we want to thank John McNamara, Sera Gamble, Henry Alonso Myers, Lev Grossman, and our entire brilliant cast, crew, writers, and directors for their beautiful creation. But most of all, we thank the fans for their tremendous support and passion. Because of you, magic will be in our hearts forever.”

What do you think? Are you a fan of The Magicians TV show? Are you sorry to hear that there won’t be a sixth season of this Syfy series?

It’s plainly evident why ratings have been dropping off: The main characters in The Magicians are so annoying that it’s almost painful to watch. If it weren’t for the plots the characters, as they’re written, would have killed the show in the first season.

I think that the producers are being shortsighted here. I refer you back to the series “Quantum Leap”. It too was to be mistakenly canceled, and the fans proved it’s merit through their loyalty, end it returned. [NBC officially canceled Quantum Leap in 1993 after a 5-year run, but fans carried out a letter-writing campaign that convinced NBC to propel Beckett through time for two more years.] So what needs to happen in order for you to realize your grandiose mistake of canceling “The Magicians”? Or as high King Margo would say, “ pull out whatever it is that’s stuck in… Read more »

Quantum Leap only ran for five years. It ended in 1993.

I love the magicians and was looking so forward to a sixth season when I saw that it was cancelled. I think that was a big mistake to cancel it and that you should review this decision and make a sixth season for hardcore fans like me

You definitely made a mistake with cancelation of the 6th season, there is a whole new magical world in which a bunch of magic stories can happen. Please make the 6th season for the fans.

I want a 6th season! It made me sad that they’re all ripped apart. Please please pleaseeeee

I look forward to a new season every year. Please keep it going!

I’m so sad this show has been cancelled! I look forward to a new season every year. Please keep it going!

I think you made a big mistake!! It was interesting and sometimes light hearted and then the surprise us with 2 of them was great!! Try it again! Us SENIOR CITIZENS NEED SHOWS LIKE THIS!! wE’RE THE ONES HOME AT NIGHT!! THANK

So… what’s the point of SyFy since they seem to cancel (popular) shows that people actually like? What does it even air aside from Futurama reruns?

Discovered this show earlier this year and am so sad to hear it isn’t being renewed/continued for a 6th season. I was an avid SyFy channel fan when Stargate, Being Human, Sanctuary, Haven & Eureka were on. I also really enjoyed Ghost Hunters because having been a property manager Grant and Jays ability to decisively and diplomatically inform people that their property had mechanical or structural issues and not a paranormal issue. This is the first time I’ve engraved with network other than the Sharknado movies since and finding out SyFy is cancelling makes me shake my head, So much… Read more »

RENEW / UNDO CANCELATION/ JUST KEEP IT! PRIMARILY, the rating system(s) that they base cancelations and renewals on is ridiculously outdated! Nothing I watch ever “counts”. Personally, I am older than the demographic. F-54. I record and binge it soon after the season ends. (Doesn’t count) YES, SyFy… Binge… heard of it? Then, get this… I re-watch the whole season on Netflix (doesn’t count, again) with my husband!! YES, even though I have seen it. Primarily, it gives me very little “Magicianless” time. Also, it is newish, as it is “Bleep Free!” Yes, the bleeps are easily guessed, but I… Read more »

I hoping Netflix or someone will pick up these show! I just started watching a yr ago and I luv it! No other show like it!! It brightens my week. The characters are awesome! I can’t believe this show has been cancelled !! Please reconsider !!

I’m devastated by this. I went out of my way to reinstate my Hulu live subscription ($50-60) just to catch up on season five instead of waiting for it to come on Netflix. I’ve been obsessed with this show since it first aired, and have religiously checked for when the new season would start again ever since. I’m 26, and I can tell you if viewership is going down it’s not because of lack of interest, it’s because people in my age demographic are tapering off of cable. All this show needs is more promotional footage, and it’d sucker in… Read more »

Totally agree with Elise here. I loved this show.More people are watching TV different ways than cable . There should be a way shows can be “Picked Up” by other carriers , if there isn’t already. Brilliant writing, Fantastic scene imagery, Creative in Every-way! Good God, Bring it Back, but not through a Pet cemetery lol ;P