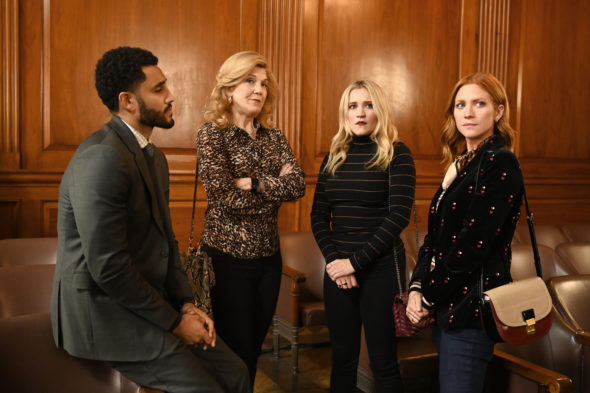 As expected, Almost Family won’t be returning for a second season. The low-rated FOX TV show has been cancelled after one season of 13 episodes.

The Almost Family TV show stars Brittany Snow, Tim Hutton, Megalyn Echikunwoke, Emily Osment, Mo McRae, Mustafa Elzein, and Victoria Cartagena. Based on the Australian drama series Sisters, this show explores what it means to be a family and the potential emotional complications that new generations of In vitro fertilization (IVF) children can face. In the series, Julia Bechley (Snow) is an adult only child who has her world turned upside down. She learns that her father, Doctor Leon Benchley (Hutton), a pioneer in fertility, secretly used his own sperm to father over a hundred children. While still reeling from this revelation, Julia discovers that she has two new half-sisters — her former best friend, Edie Palmer (Echikunwoke), and ex-Olympic athlete Roxy Doyle (Osment). As the three daughters begin to reconcile their new reality, Julia starts life without having her dad by her side, Edie comes to grips with her sexuality, and Roxy faces adulthood out of the spotlight. The trio attempt to bond as unconventional sisters while dealing with new siblings as part of a rapidly expanding and very untraditional extended family.

The first season of Almost Family averaged a 0.44 rating in the 18-49 demographic and 1.53 million viewers. Airing on Wednesday nights, the series had a slow start in the ratings and the numbers got a lot worse as the weeks progressed. It’s FOX’s lowest-rated scripted series of the season.

A cancellation seemed certain when FOX pulled Almost Family from the schedule with just two installments remaining in the season. The network aired them on a Saturday night, more than a month later.

The cancellation comes as Hutton and a friend have been accused of raping a 14-year-old girl in 1983.

What do you think? Did you enjoy the Almost Family TV show? Would you have watched a second season on FOX?

Not at all happy that this show was cancelled! I didn’t know about it and happened to find it on demand. Absolutely loved the show. I record a lot of shows and I don’t watch tv at traditional times of airing and record it for later. I also don’t watch commercials for upcoming shows. I think it’s unfair to cancel a very interesting and compelling show when sometimes it takes a bit for people to find new shows and for it to gain interest! Very upset viewer!

Not happy about this show being cancelled especially since you left us hanging as is usually the case when shows are cancelled by networks. They don’t think about the people who have gotten invested in their show and would possibly like to know what happens to the characters. The least the networks could do would be to do a “wrap up show” for us faithfull viewers.

I totally agree! I thought is was a very good show!

Bring it back❣I really liked the shows premise. I mean I love my fire/911 dramas, my SVU’s/Police/Swat/Detective action/dramas and of course all of my many medical dramas❣ However, with all that action/drama you have to have some lighthearted comedy to balance everything out. Unfortunately, I don’t care for many of the comedy/game shows they are putting out now. It’s a shame they took it off the air * maybe Netflix will pick it up & work on some more episodes & hopefully give us at least a couple more seasons to enjoy watching them explore their newfound family & all… Read more »

I LOVED Almost Family. I am disappointed that it won’t be returning and I am HORRIFIED that Timothy Hutton is accused of rape.

Just introduced my daughter to the show and she was really disappointed that it is no more; as am I.

I reallllly liked the show!

Bring back Almost Family!! I really enjoy allllll the characters!!! Not everyone wants a Vampire show or Zombie show. Keep the diversity and emotion and humor that this show offers!!!

I also really enjoy(ed) this show. I’m disappointed in FOX for choosing to leave the viewers hanging with A LOT of unanswered questions. You could always do a 2 hour TV “movie” the wraps everything up in a nice little bow for us.

I loved this show! I watched every episode! I’m really disappointed it will not be returning.

I love this show!! I just finished binging it and came across this aricle:(( BRING IT BACK!!!!!