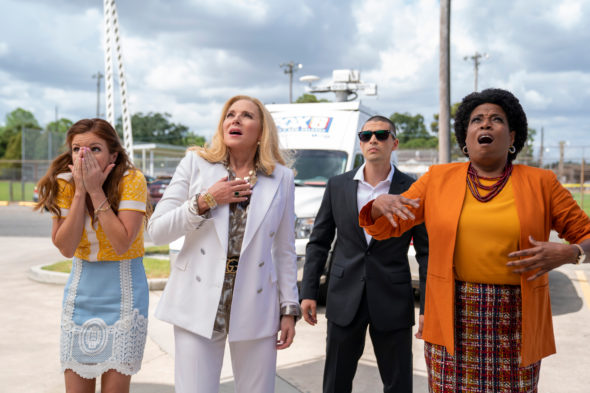 The soapy twists and turns of the Monreaux family won’t see a second season on FOX. The network has cancelled the Filthy Rich TV series after five episodes.

A Southern Gothic family drama series, the Filthy Rich TV show stars Kim Cattrall, Corey Cott, Olivia Macklin, Aubrey Dollar, Melia Kreiling, Benjamin Levy Aguilar, Mark L. Young, Steve Harris, Aaron Lazar, and Gerald McRaney. The Monreaux clan is a mega-rich Southern family that’s famous for creating a wildly successful Christian television network. On the cusp of launching a digital retail arm of the company, patriarch Eugene (McRaney) dies in a plane crash. His wife, Margaret (Cattrall), is left to take charge of the family business and is seen as a bigger-than-life leader to the religious and Southern communities. Eugene’s apparent death greatly impacts Margaret and the two adult Monreaux children but the whole clan’s lives are thrown into turmoil when it’s revealed that Eugene has named three illegitimate kids in his will. With plenty of plot twists and turns — mixed in with lies, deceit, and shade from every direction — this is a world in which everyone has an ulterior motive – and no one is going down without a fight.

The first season of Filthy Rich averages a 0.36 rating in the 18-49 demographic and 1.98 million viewers. It is one of the lowest-rated series currently on the network.

Five episodes have aired thus far and, according to Variety, the network will run the remaining five installments. FOX also cancelled low-rated neXt today. Both were reportedly cancelled due to low ratings and rising production costs due to COVID-19.

Want more? Check out our lists for additional cancelled TV shows. Our status pages are here.

What do you think? Have you watched the Filthy Rich TV series? Would you have watched season two of this FOX series?

Please bring back Filthy Rich I need to see season 2. It’s not fair to get us hooked and leave us hanging.

I am super pissed. And I just discovered this show today on Hulu…watched the whole season and wanted info about next season! It was ******* canceled, FOX? The Hell is wrong with you? It wasn’t about cops or 911 or Fn lawyers, so its gone? It had me after the first 2 shows, and I am an atheist ffs! And what was the problem with an all star cast of past and present stars?? Real stars…..I saw ALL of you there, and the way it ended, the writing was great and I didnt see it coming. At all. I will… Read more »