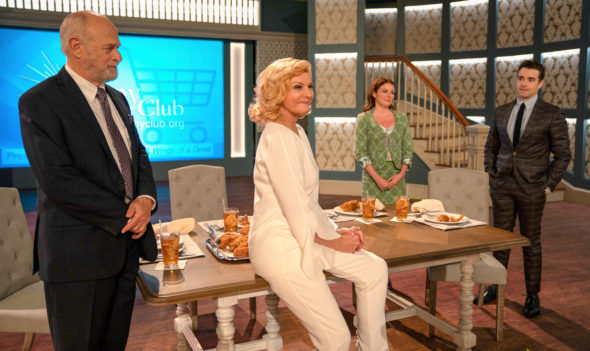 How many outrageous plot twists are in the first season of the Filthy Rich TV show on FOX? As we all know, the Nielsen ratings typically play a big role in determining whether a TV show like Filthy Rich is cancelled or renewed for season two. Unfortunately, most of us do not live in Nielsen households. Because many viewers feel frustration when their viewing habits and opinions aren’t considered, we invite you to rate all of the first season episodes of Filthy Rich here. *Status Update Below.

A FOX Southern Gothic family drama series, the Filthy Rich TV show stars Kim Cattrall, Corey Cott, Olivia Macklin, Aubrey Dollar, Melia Kreiling, Benjamin Levy Aguilar, Mark L. Young, Steve Harris, Aaron Lazar, and Gerald McRaney. The Monreaux clan is a mega-rich Southern family that’s famous for creating a wildly successful Christian television network. On the cusp of launching a digital retail arm of the company, patriarch Eugene (McRaney) dies in a plane crash. His wife, Margaret (Cattrall), is left to take charge of the family business and is seen as a bigger-than-life leader to the religious and Southern communities. Eugene’s apparent death greatly impacts Margaret and the two adult Monreaux children but the whole clan’s lives are thrown into turmoil when it’s revealed that Eugene has named three illegitimate kids in his will. With plenty of plot twists and turns — mixed in with lies, deceit, and shade from every direction — this is a world in which everyone has an ulterior motive – and no one is going down without a fight.

What do you think? Which season one episodes of the Filthy Rich TV series do you rate as wonderful, terrible, or somewhere between? Do you think that Filthy Rich should be cancelled or renewed for a second season on FOX? Don’t forget to vote, and share your thoughts, below.

Wow I was totally into this show, binge watched it and had many friends watch it just to find out FOX canceled it. Not cool FOX, not cool at all. Bring season 2!

Absolutely ridiculous to have canceled this show.. I was looking forward to season 2.. This was such a fresh/new type of show & geniusly made.. Bring it back, please..

PLEASE BRING BACK FILTHY RICH!!! It’s LITERALLY the only show I watch on TV. I LOVE THE ENTIRE CAST BUT KIM CATTRALL AND STEVE HARRIS MAKE THIS SHOW SOOOOO AMAZING!!! I want to know what secrets Franklin knows and where the bodies are buried!!!! Fox is making a mistake canceling this show. Whoever is in charge needs to reconsider. I never watch it the day it airs because I work long days, but when I can’t wait to watch it on demand when I have time. I watched the entire season and even got other family members to watch it… Read more »

I really hope that the network changes there minds and comes back with season 2. out of all the shows to cancel they chose this great, funny dramatic show!!!

Seems to me that this show fits in very very well with all the racial upheaval right now. Especially the last line of the series “ Burn the Old South Down “ !!!!!!