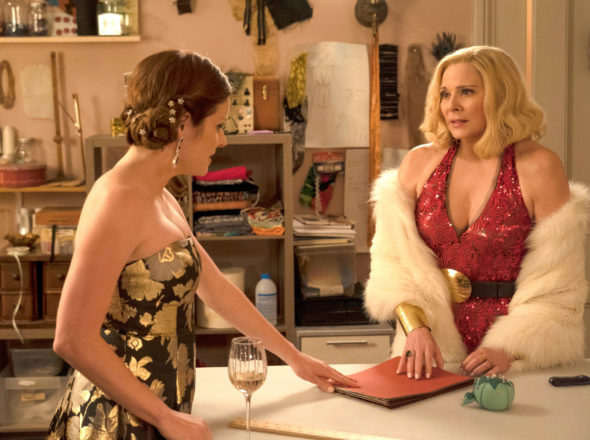 Filthy Rich is ending its run next week and the FOX network has now released a preview of the series finale. The drama was cancelled mid-way through its first season. Kim Cattrall, Corey Cott, Olivia Macklin, Aubrey Dollar, Melia Kreiling, Benjamin Levy Aguilar, Mark L. Young, Steve Harris, Aaron Lazar, and Gerald McRaney star in this series about a mega-rich Southern family who made their money via a Christian television network.

FOX revealed the following about the Filthy Rich series finale in a press release:

“In the shocking series finale, the Monreaux family finds out an explosive secret that threatens to tear them apart. Meanwhile, with Mark and Rose ready to take a serious next step in their relationship, Margaret feels compelled to intervene and protect Rose in the all-new “1 Corinthians 3:13” series finale episode of FILTHY RICH airing Monday, Nov. 30 (9:00-10:00 PM ET/PT) on FOX.”

Check out the preview for the finale of Filthy Rich below.

What do you think? Are you a fan of Filthy Rich? Will you watch the finale on Monday night on FOX?

Initially when I saw the advertisment for Filthy Rich, I wasn’t interested. After seeing more advertisements for the series, I gave it a chance and I’m glad I did. I understand that we are living in different times and dealing with a global pandemic; however, this series should have been given the same amount of publicity and advertisment as other new series up fof consideration at Fox. The cast of the series, some are similar faces and some are new. I think the writers of the show did a great job in bringing social issues subtly to the forefront and… Read more »

Please have a second season. I loved this show.

please continue the show I enjoyed it. with all the crazy in the world it was a nice escape and it was exciting and funny at the same time. please keep it going…

I have Loved Every Episode Filthy Rich. Please Make a Season 2 Don’t leave me Wanting More!!!

I started watching filthy rich and as the shows went on I grew to love it more and more, its too bad it will be canceled..

It’s a disgrace that Fox canceled this show after only one season. The writing & the acting were both excellent. You should have given it a chance.

I think it’s terrible that they have canceled the show!!
My daughter and I get together to watch it- we found it hilarious with the theme over the top. Given the mental state of people today it was the best medicine.
Shame ! Shame! Shame!

I enjoyed the over the top drama. It was fun to watch and deserves a second season and more. Hate when shows end with an explosive ending and we never see it again.

I will watch it or better yet on demand. I still wish that Spectrum on Demand would pick up Filthy Rich as series for the second season.

Didn’t watch it and certainly won’t miss it.I hope everyone involved does find other projects that get better ratings.

You missed a good one. So good to see Kim Catrall back on tv.